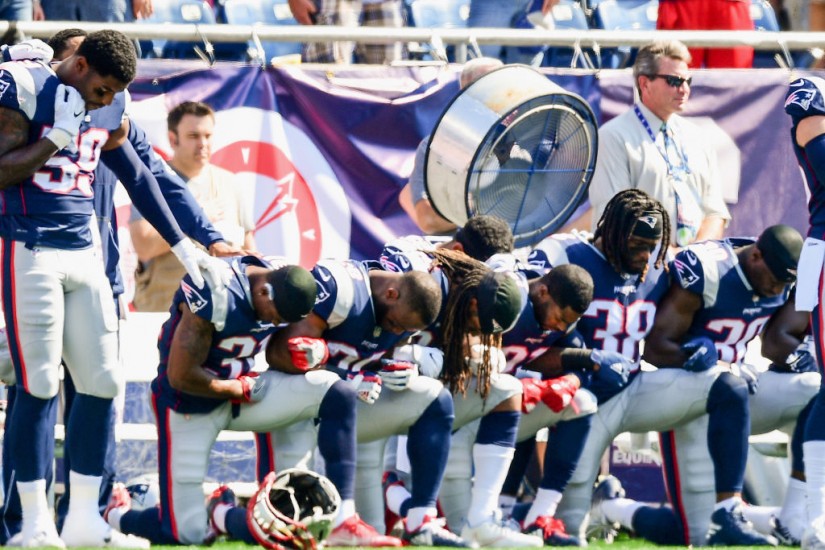 Members of the New England Patriots kneel as the National Anthem is played before a game at Gillette Stadium on September 24, 2017.
Billie Weiss/Getty Images

“Wouldn’t you love to see one of these N.F.L. owners, when somebody disrespects our flag, to say, ‘Get that son of a bitch off the field right now, out, he’s fired.’” With those disparaging words, spoken Friday night at a campaign speech for a Senate candidate in Alabama, the president of the United States ignited a firestorm, which he continued to stoke on Twitter over the weekend.

“If a player wants the privilege of making millions of dollars in the NFL, or other leagues,” he wrote on Saturday, “he or she should not be allowed to disrespect our Great American Flag (or Country) and should stand for the National Anthem. If not, YOU’RE FIRED. Find something else to do!”

It’s no surprise that a man who seemed to have thought Frederick Douglass was still alive also appears to believe that football was a blessedly apolitical zone until the likes of Colin Kaepernick and Michael Bennett, two prominent athletes who have taken a knee during the national anthem to protest racism, appeared on the gridiron. But Trump couldn’t be more off base.

In the pros, and even more at the college level, football was not incidental to the doctrine of segregation and the ideology of white supremacy. It was one of the pillars on which they rested. At the football powerhouses in the American South, the sport resisted integration nearly a decade longer than lunch counters, bus systems, hotels and other strongholds of Jim Crow.

Under federal pressure in 1963, for example, the University of Alabama admitted its first two black students. Seven more years passed, however, before the Crimson Tide’s legendary football coach, Paul Bryant, known as Bear, signed his first African-American recruit, Wilbur Jackson. And Bryant did so while he was being sued by civil rights attorneys for his failure to desegregate the team.