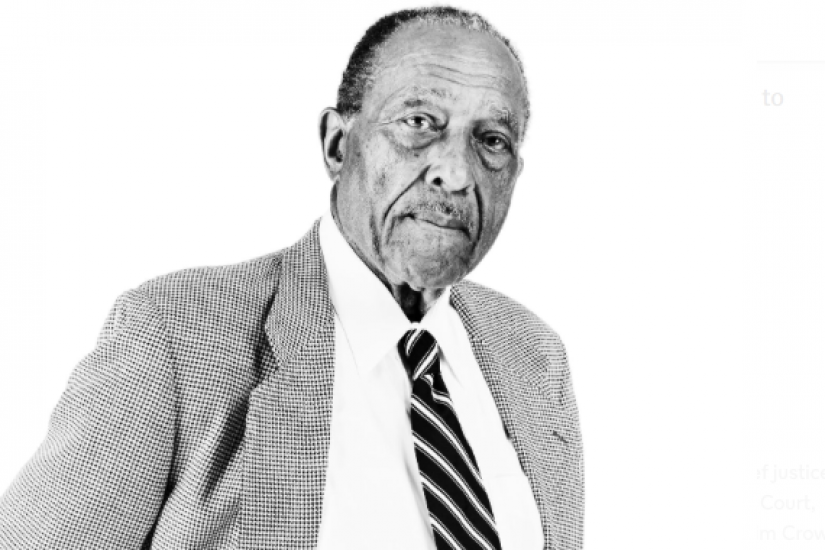 Henry Frye, the first black chief justice of the North Carolina Supreme Court, Frye, 83, was prevented by a Jim Crow literacy test from registering to vote on his wedding day in 1956.
Jeremy M. Lange/New York Times

On the morning of his wedding, in 1956, Henry Frye realized that he had a few hours to spare before the afternoon ceremony. He was staying at his parents’ house in Ellerbe, N.C.; the ceremony would take place 75 miles away, in Greensboro, the hometown of his fiancée; and the drive wouldn’t take long. Frye, who had always been practical, had a practical thought: Now might be a good time to finally register to vote. He was 24 and had just returned from Korea, where he served as an Air Force officer, but he was also a black man in the American South, so he wasn’t entirely surprised when his efforts at the registrar’s office were blocked.

Adopting a tactic common in the Jim Crow South, the registrar subjected Frye to what election officials called a literacy test. In 1900, North Carolina voters amended the state’s Constitution to require that all new voters “be able to read and write any section of the Constitution in the English language,” but for decades some registrars had been applying that already broad mandate even more aggressively, targeting perfectly literate black registrants with arbitrary and obscure queries, like which president served when or who had the ultimate power to adjourn Congress. “I said, ‘Well, I don’t know why are you asking me all of these questions,’ ” Frye, now 83, recalled. “We went around and around, and he said, ‘Are you going to answer these questions?’ and I said, ‘No, I’m not going to try.’ And he said, ‘Well, then, you’re not going to register today.’ ”

Sitting with me on the enclosed porch of his red-brick ranch house in Greensboro, drinking his wife’s sweet tea, Frye could joke about the exchange now, but at the time it left him upset and determined. When he met Shirley at the altar, the first thing he said was: “You know they wouldn’t let me register?”

“Can we talk about this later?” she replied.

After a few weeks, Frye drove over to the Board of Elections in Rockingham, the county seat, to complain. An official told him to go back and try again. This time a different registrar, after asking if he was the fellow who had gone over to the election board, handed him a paragraph to copy from the Constitution. He copied it, and with that, he became a voter.

But in the American South in 1956, not every would-be black voter was an Air Force officer with the wherewithal to call on the local election board; for decades, most had found it effectively impossible to attain the most elemental rights of citizenship. Only about one-quarter of eligible black voters in the South were registered that year, according to the limited records available. By 1959, when Frye went on to become one of the first black graduates of the University of North Carolina law school, that number had changed little. When Frye became a legal adviser to the students running the antisegregation sit-ins at the Greensboro Woolworth’s in 1960, the number remained roughly the same. And when Frye became a deputy United States attorney in the Kennedy administration, it had grown only slightly. By law, the franchise extended to black voters; in practice, it often did not.

What changed this state of affairs was the passage, 50 years ago this month, of the Voting Rights Act. Signed on Aug. 6, 1965, it was meant to correct “a clear and simple wrong,” as Lyndon Johnson said. “Millions of Americans are denied the right to vote because of their color. This law will ensure them the right to vote.” It eliminated literacy tests and other Jim Crow tactics, and — in a key provision called Section 5 — required North Carolina and six other states with histories of black disenfranchisement to submit any future change in statewide voting law, no matter how small, for approval by federal authorities in Washington. No longer would the states be able to invent clever new ways to suppress the vote. Johnson called the legislation “one of the most monumental laws in the entire history of American freedom,” and not without justification. By 1968, just three years after the Voting Rights Act became law, black registration had increased substantially across the South, to 62 percent. Frye himself became a beneficiary of the act that same year when, after a close election, he became the first black state representative to serve in the North Carolina General Assembly since Reconstruction.