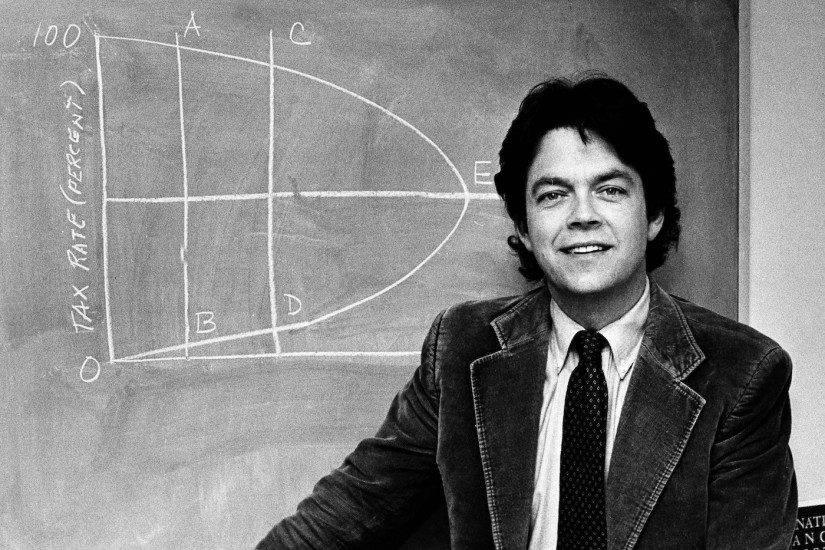 Economist Arthur Laffer feels that the economy will start to pick up now that substantial tax cuts are in place. He also says that if Congress had listened to him originally the country would be in better shape financially today (1981).
AP Photo

It is a little unsettling that the intellectual underpinning of tax policy in the United States today was jotted down on a napkin at the Two Continents Restaurant in Washington in December 1974.

That was when, legend has it, Arthur Laffer, a young economist at the University of Chicago, deployed the sketch over dinner to convince Dick Cheney and Donald H. Rumsfeld, aides to President Gerald R. Ford, that raising tax rates would reduce tax revenue by hampering growth.

It was another economy. The top marginal income tax rate was 70 percent then. For three decades, just over 10 percent of the nation’s income had gone to the 1 percent earning the most. Economists believed Simon Kuznets’ proposition that though market forces would widen inequality at early stages of growth, further economic development would ultimately lead it to narrow. The paramount policy challenge of the day was how to raise productivity.

To many economists, Mr. Laffer’s basic argument that high taxes would at some point discourage effort and reduce growth made sense: Why work or invest more if the government will keep almost all the fruits of your troubles? Even Arthur M. Okun, who had been President Lyndon B. Johnson’s chief economic adviser, was writing about leaky buckets to illustrate a trade-off between efficiency and equity: Taxing the rich to pay for programs for the poor could slow growth down, in part by reducing the incentive of the rich to earn more.

It is unclear whether reality ever followed Mr. Laffer’s prescription. “In 1986 we dropped the top income tax rate from 50 to 28 percent and the corporate tax rate from 46 to 34 percent,” said Bruce Bartlett, a policy adviser in the administration of President Ronald Reagan. “It’s hard to imagine a bigger increase in incentives than that, and I can’t remember any big boost to growth.”

Nonetheless, tax policy is today is still being driven by his decades-old argument, devised in an economy that looks nothing like today’s.