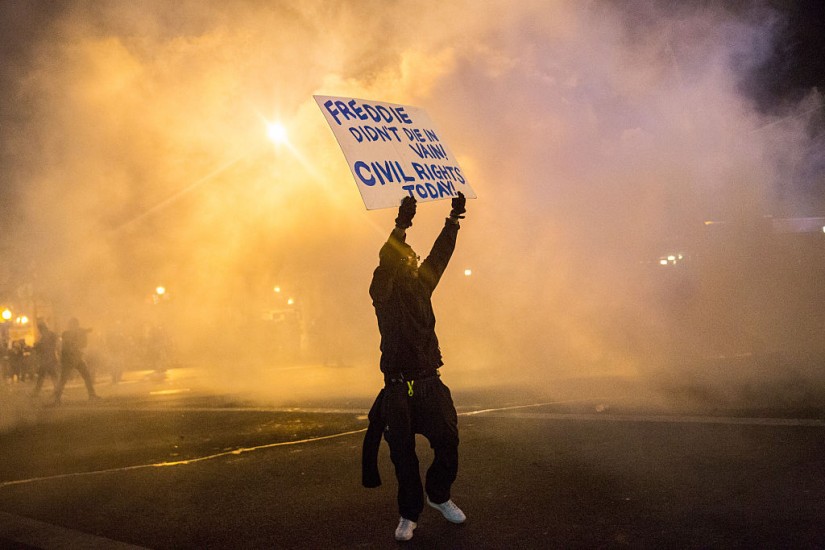 A protester walks through Baltimore, Maryland, holding a sign in response to the death of Freddie Gray. Similar artifacts like this protest sign are being collected by museums across the country.
Andrew Burton/Getty Images

In April 2015, Aaron Bryant rushed to be there when demonstrations swept through Baltimore on the day of Freddie Gray’s funeral. He filmed protesters angered by Mr. Gray’s death throwing rocks, watched the helicopters overhead and listened to marchers singing hymns.

But Mr. Bryant was neither a police officer nor a participant in the protest. He was a curator for the National Museum of African American History and Culture, there to collect artifacts, testimony and footage as the events unfolded. During the days of protest, he mingled with the crowds, solicited donations of clothing and signs and scooped up posters, fliers and buttons.

So after Councilwoman Sharon Green Middleton addressed a rally one day, Mr. Bryant approached to ask if she might donate the anti-violence T-shirt she was wearing. It now hangs in the museum.

Video shot by the curator Aaron Bryant at a march for peace. Mr. Bryant was in Baltimore to collect artifacts following the death of Freddie Gray.
Though curators have long secured select artifacts whose significance was immediately apparent, museum experts say the scope of what the African American museum and others now call “rapid response collecting” has grown significantly in recent years.

The museum’s collection includes dozens of items gathered during the protests — a rake used in the cleanup, a placard that demanded “Justice for Freddie Gray” — some obtained on the spot, others days later after curators had combed social media, television and newspapers to find people who were there and ask what they might donate.

“We are in times that require us to acknowledge that history is happening before our eyes,” Mr. Bryant said.