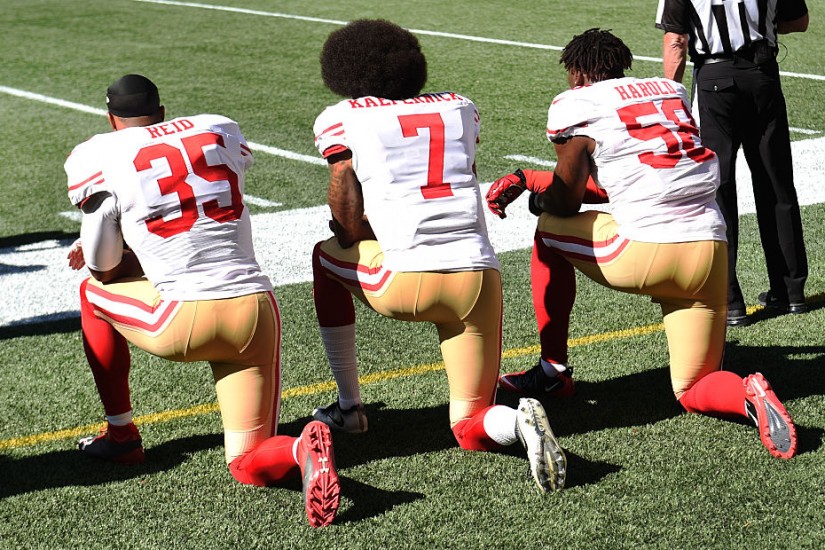 Colin Kaepernick kneels on the sidelines during the national anthem before the game against the Seattle Seahawks on September 25, 2016 in Seattle, Washington.
Steve Dykes/Getty Images
…

“You’ll never know how easy you and Jackie and Doby and Campy made it for me to do my job by what you did on the baseball field,” the Rev. Dr. Martin Luther King Jr. said to the baseball superstar Don Newcombe — speaking of Jackie Robinson, Larry Doby and Roy Campanella — a few weeks before King was assassinated in Memphis in 1968.

Newcombe was humbled, he told a reporter. “Imagine, here is Martin getting beaten with billy clubs, bitten by dogs and thrown in jail, and he says we made his job easier.”

The billy club and the baseball bat were competing weapons in the war for the mind of white America. But increasingly, in the physics of race, it became more difficult for two objects to occupy the same space at the same time. The preservation of a society that prevented more black people from thriving ran headlong into an appreciation for the athletic gifts — and, by extension, the humanity — of black people. Robinson, Doby, Campanella and Newcombe were the easiest translation of what the civil rights movement aimed for: Give black folk a chance, treat us fairly, make one set of rules for us all to abide by, and we will do well.

These athletes saw the contradiction between American ideals of fairness and justice and their arbitrary application to people of color. A black person had to be a superstar athlete and beloved icon to enjoy only some of the perks that many white people could take for granted at birth.