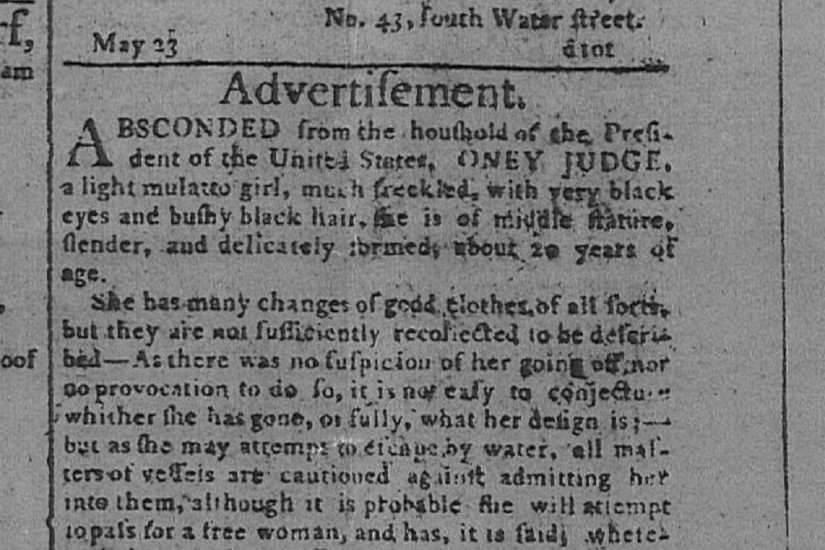 A 1796 runaway slave advertisement seeking Oney Judge, who escaped from George Washington's household.
Wikimedia Commons
…
Ms. Dunbar, the author of “Never Caught,” first came across Ona Judge in the late 1990s, when she was a graduate student at Columbia researching free black women in Philadelphia. One day in the archives, she noticed a 1796 newspaper ad offering $10 for the return of “a light Mulatto girl, much freckled, with very black eyes and bushy hair” who had “absconded” from the president’s house.
“I said to myself: ‘Here I am, a scholar in this field. Why don’t I know about her?’” Ms. Dunbar recalled.

Since then, Judge’s story has inspired several children’s books, and even an episode of “Drunk History.” But “Never Caught” is the first full-length nonfiction account, drawing on some newly unearthed sources to track her from Mount Vernon to New York City, Philadelphia and then New Hampshire, at a time when gradual abolition left the line between slavery and freedom ambiguous.

“There’s a myth of the North as free, but her story shows how complicated that was,” Ms. Dunbar said.

It is in the meticulous ledgers of Mount Vernon that we first see Ona Maria Judge, who was born around 1773 to an enslaved mother and a father who was a white indentured servant. At age 9 she was brought to live in the mansion house, eventually becoming Martha Washington’s personal maid.

When Washington became president, Judge followed the first couple to New York and then Philadelphia, home to a growing free black community.

Free blacks, Ms. Dunbar writes, aided Judge’s escape in the midst of a presidential dinner, after she had learned that she was to be given to Martha Washington’s granddaughter, Eliza. And it was free blacks who helped her catch a sailing ship to Portsmouth, N.H., where she married, had three children and lived on the edge of poverty, laboring in households far less exalted than the Washingtons’.

In two interviews published in abolitionist newspapers shortly before her death in 1848, Judge testified to the desire for freedom that drove her to run away from the Washington household, where she had “never received the least moral or mental instruction,” she said.
View on New York Times
View Connections