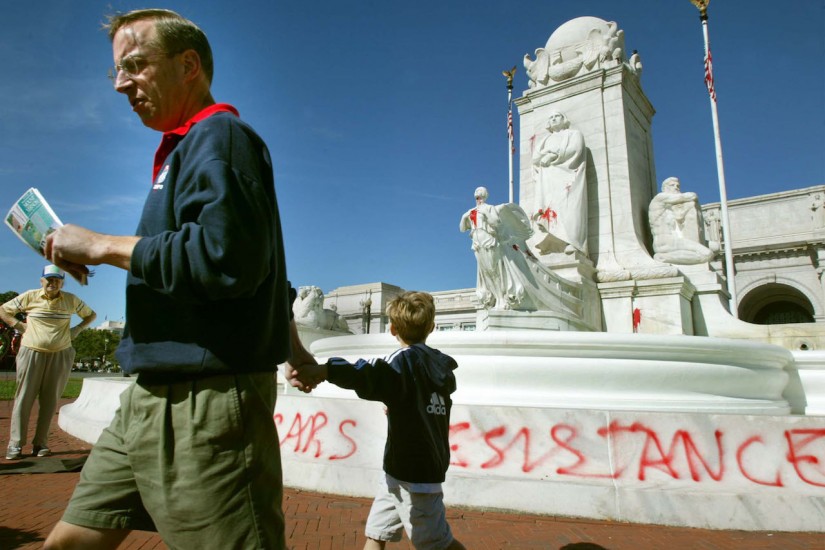 A man and young boy walk past a statue of Christopher Columbus in Washington, D.C. that was vandalized with red paint (October 14, 2002)
Mark Wilson/Getty Images
…

In October, the Cherokee Courthouse was the rallying point for a march to observe Indigenous Peoples’ Day, meant to replace Columbus Day’s celebration of conquest with appreciation for the Americas’ original inhabitants. Standing in front of the courthouse, Candessa Tehee, a professor at Northeastern State University, told The Cherokee Phoenix, “To celebrate Columbus is to celebrate an individual who is one of the first documented slave traders of North America.” She is correct, but it is not boring that she said this while standing on the same lawn as the monuments to Cherokee Confederates.

Let’s stop and indulge in a moment of nostalgia for the good old days of, oh, six months ago when the question was whether to dismantle taxpayer-maintained statues of traitors like Robert E. Lee — and the answer was clear to every citizen and elected official mature enough to accept a female Doctor Who. All subsequent arguments on which monuments to heave into the landfill of history are going to be murkier and will surely lay bare what an exasperating country General Lee failed to destroy.

Take Christopher Columbus. Announcing a task force to review New York City monuments “that in any way may suggest hate or division or racism,” Mayor Bill de Blasio described the honoree of Columbus Circle as “complicated, to say the least.”

Yet I wonder how many of the nation’s many Columbus memorials were truly built as tributes to a navigationally challenged slavemonger. How many were instead put up by Italian-American civic organizations as a rebuke to decades of discrimination and violence and as a reminder to their neighbors that Italians have been here since this objectionable Genoa-born adventurer set foot in this hemisphere in 1492, well before a bunch of equally creepy blond Protestants followed in his wake?