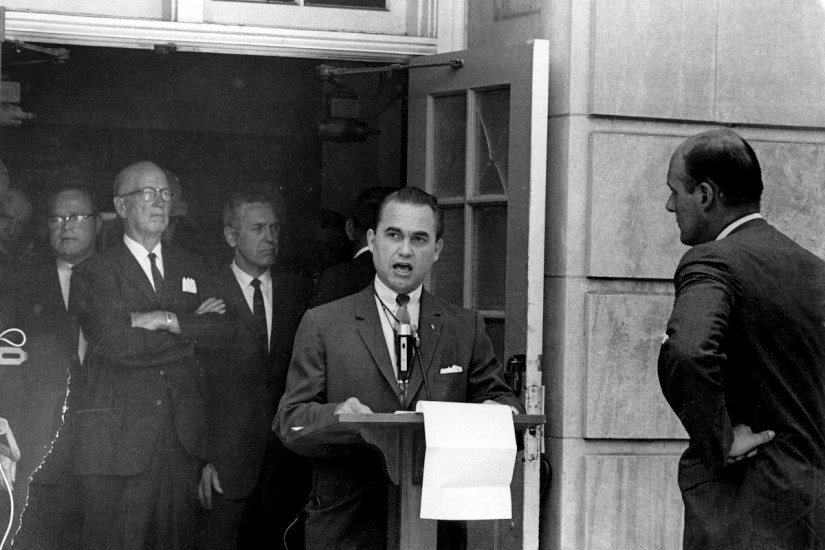 At the University of Alabama, Governor George Wallace publicly refuses to allow African American students entry to the school despite a federal mandate (1963).
Hulton Archive/Getty Images
…

I will never forget Mr. Wallace's inaugural address as Governor in 1963. Looking defiant, he declared, ''Segregation now, segregation tomorrow, segregation forever.'' That day, my heart sank. I knew his defense of ''states' rights'' was really a defense of the status quo in Alabama.

Mr. Wallace used the language of rage and hate to rise to power and to become a force in national politics. Staring down Federal officials, he told every black American that he or she was not welcome at the University of Alabama.

The Alabama of the 1950's and 1960's was a turbulent place. African-Americans were seeking to desegregate restaurants, bathrooms and buses and to secure the right to vote. Governor Wallace and his allies drew in every available resource to stem the tide of progress.

A showdown was inevitable. Much of the bloodshed in Alabama occurred on Governor Wallace's watch. Although he never pulled a trigger or threw a bomb, he created the climate of fear and intimidation in which those acts were deemed acceptable.

Although we had long been adversaries, I did not meet Governor Wallace until 1979. During that meeting, I could tell that he was a changed man; he was engaged in a campaign to seek forgiveness from the same African-Americans he had oppressed. He acknowledged his bigotry and assumed responsibility for the harm he had caused. He wanted to be forgiven.

The very essence of the civil rights movement was its appeal to the conscience of those who beat us with batons, attacked us with dogs and stood defiantly at the schoolhouse door. We wanted our enemies to know that every blow they struck was a blow against another human being. The bloodshed that resulted was the blood of all humanity.

When I met George Wallace, I had to forgive him, because to do otherwise -- to hate him -- would only perpetuate the evil system we sought to destroy.