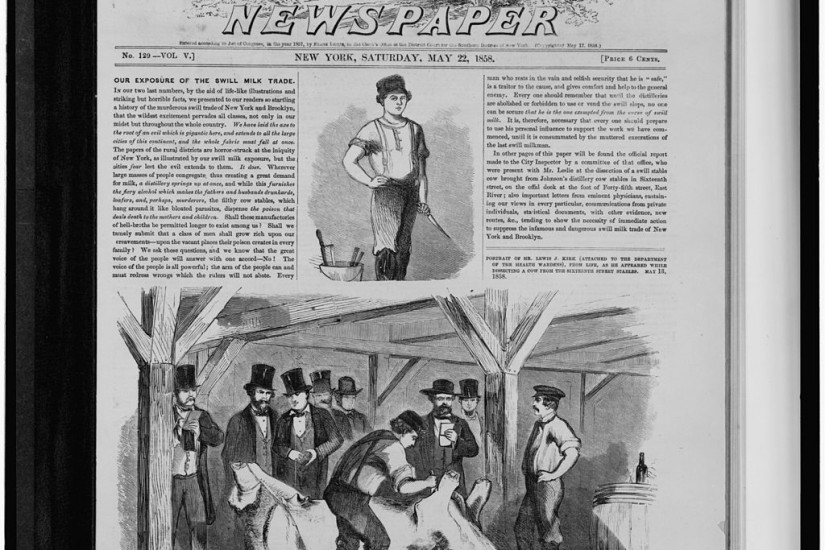 The May 22, 1858 edition of Frank Leslie's Illustrated Newspaper, with a story on the swill milk trade on the front page.
Library of Congress

In the 1850s, New York City babies were being mysteriously poisoned.

Nearly 8,000 babies a year shriveled to death from uncontrollable diarrhea, as reported by The New York Times. Without the luxury of advanced medical diagnostics, doctors struggled to identify the culprit. The public floated theories—nutritional and digestive diseases like cholera infantum and marasmus, to give name to the epidemic—but with little evidence, they ultimately gave a collective shrug. That is, until 1858, when an enterprising journalist named Frank Leslie unveiled the offender in a series of scathing exposés: milk.

Swill milk, to be exact—the tainted result of miasmic dairy cows being fed leftover mash from Manhattan and Brooklyn whiskey distilleries. It was the result of distillers looking to profit from their leftover grain. It was an especially lucrative era to be producing cow milk: Americans at the time considered cow milk to be highly nutritious and an effective substitute for breastmilk. Back then, economic and societal pressures pushed women to wean their babies sooner. In her book Taming Manhattan: Environmental Battles in the Antebellum City, Dr. Catherine McNeur writes that vendors sometimes sold swill milk for as little as six cents per quart, which especially appealed to lower-class mothers who needed to wean early so they could return to work. But the poor weren’t the only ones looking for a solution.

“[Middle-class women] were having numerous children, but also had to fulfill the obligations of politeness of middle class society, which required them to be available for visiting, and leading the household. In order to do those things, it was necessary they not be breastfeeding all the time,” says Dr. Melanie Dupuis, author of Dangerous Digestion: The Politics of American Dietary Advice. “Other theories for why women were weaning earlier include corsets, and women’s health during that time period, which tended to be poor. Also, men didn’t like their women to be breast feeding all the time. Some argue it was modesty.”

So New Yorkers gravitated towards “Pure Country Milk”—an intentional misbranding advertised across the side of swill milk wagons and on swill milk street-corner vendors’ signs.