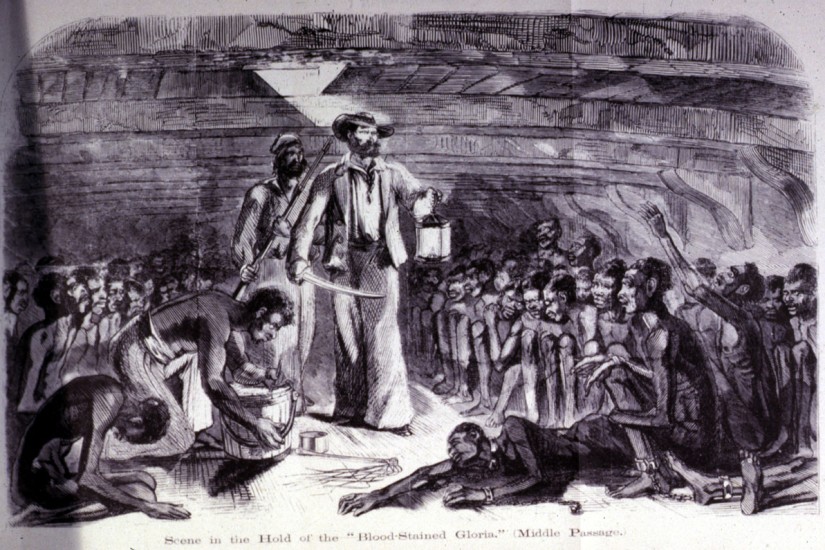 &#34;Scene in the Hold of the 'Blood-Stained Gloria' (Middle Passage). From Richard Drake, Revelations of a Slave Smuggler (New York, 1860).
Library of Congress
Lorna Gail Woods had heard stories of the Clotilda since before she could speak. In the evenings, her grandmother would hold her on the porch and tell her the tale of how her great-great-grandfather came to Alabama on the last known slave ship to come to the United States.

They were brought by force, her grandmother would tell her, by an American businessman who just wanted to win a bet. Her great-great-grandfather Charlie Lewis was the oldest of 110 slaves bought in West Africa, chained in the hull of the Clotilda and sailed across the Atlantic to the Mobile-Tensaw River Delta in Alabama in 1860. But after the slaves were unloaded, the crew burned the ship, and its wreckage was never found, so many people doubted the story.

“My grandmother would tell us the story so we wouldn’t forget and so that we could continue to tell the story,” Ms. Woods, 69, said over the phone in a warm, Southern cadence.

On Monday, the story that Ms. Woods’s family — and many like hers in Africatown, the historic neighborhood of about 2,000 on the shores of the delta just north of Mobile — had passed down for more than 150 years became much more real.

On that day, Ben Raines, a reporter for AL.com, published an article in which he told of discovering the charred wooden remains of a boat believed to be the Clotilda. A team of archaeologists who visited the site said that based on the dimensions of the wreckage and its contents — including charred timber, iron drifts — the remnants were most likely those of the slave ship.

“This is the proof that we needed,” Ms. Woods said. “I am elated because so many people said that it didn’t really happen that way, that we made the story up.”

Ms. Woods and other descendants said they were ecstatic about the news but still coming to terms with it. While the Clotilda had always been at the center of family lore, the common bond among neighbors in Africatown, they previously had to accept the story on faith.

About 10 of the 100 or so descendants of the Clotilda slaves who still live in Africatown gathered on Wednesday to discuss what should be done with the wreckage if it proves to be the Clotilda.

Should it be removed and restored? Should it stay where it is and the land be protected? Should the wreckage be placed in a museum?