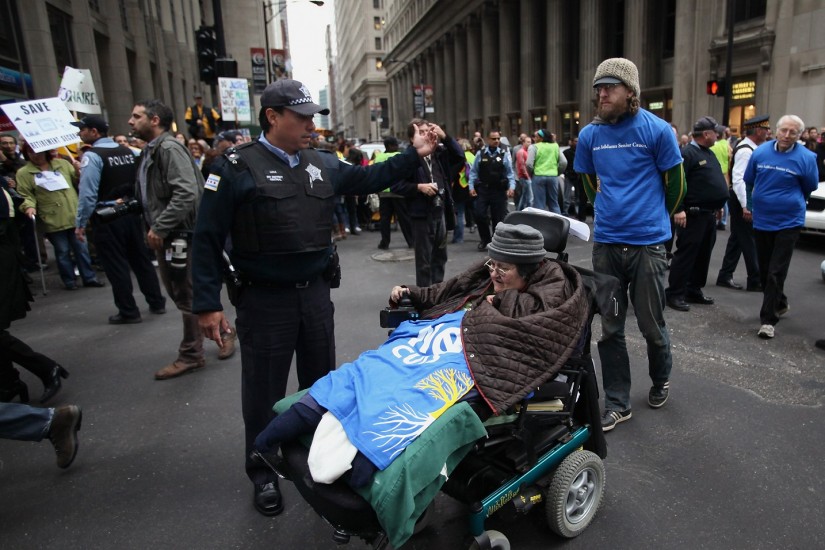 Demonstrators are led away by police during a protest against cuts to federal safety net programs, including Social Security, Medicare, and Medicaid on November 7, 2011 in Chicago, Illinois.
Scott Olson/Getty Images

The “able-bodied” are now everywhere among government programs for the poor, Republican officials point out. They’re on food stamps. They’re collecting welfare. They’re living in subsidized housing. And their numbers have swelled on Medicaid, a program that critics say was never designed to serve them.

These so-called able-bodied are defined in many ways by what they are not: not disabled, not elderly, not children, not pregnant, not blind. They are effectively everyone left, and they have become the focus of resurgent conservative proposals to overhaul government aid, such as one announced last month by the Trump administration that would allow states to test work requirements for Medicaid.

Able-bodied is not truly a demographic label, though: There is no standard for physical or mental ability that makes a person able. Rather, the term has long been a political one. Across centuries of use, it has consistently implied another negative: The able-bodied could work, but are not working (or working hard enough). And, as such, they don’t deserve our aid.

“Within that term is this entire history of debates about the poor who can work but refuse to, because they’re lazy,” said Susannah Ottaway, a historian of social welfare at Carleton College in Minnesota. “To a historian, to see this term is to understand its very close association with debates that center around the need to morally reform the poor.”

In Washington, “able-bodied” has retained its moral connotations but lost much of its historical context. The term dates back 400 years, when English lawmakers used it the same way, to separate poor people who were physically incapable of supporting themselves from the poor who ought to be able to. Debates over poverty in America today follow a direct line from that era.