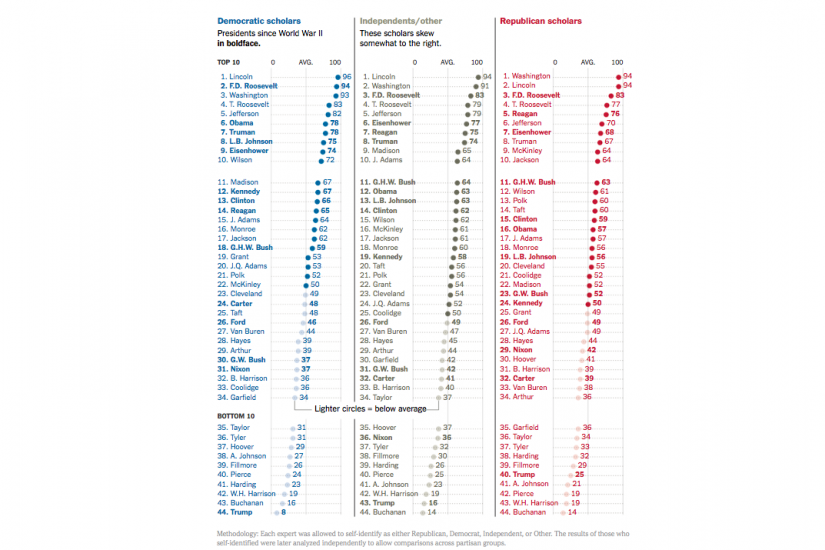 Where does Donald Trump rank on the list of American presidents?

We surveyed presidential politics experts to sketch out a first draft of Trump’s place in presidential history.

Since our previous survey in 2014, some presidential legacies have soared (Barack Obama’s stock has climbed into the Top 10), while others have fallen (Andrew Jackson toppled to 15, out of the Top 10).

And President Trump? Let’s say that, according to the 170 members of the American Political Science Association’s Presidents and Executive Politics section who filled out our survey, he has at least three years to improve on an ignominious debut.

James Buchanan, who was at the helm as the United States careened into civil war, was dislodged from his position as our nation’s worst president by our current president, Trump.

His Oval Office predecessor, Barack Obama, shot into the Top 10, up from 18th in the previous survey. Ulysses S. Grant also got a bump, up seven places from 2014, perhaps owing to a strong assist from Ron Chernow’s recent masterpiece.

The biggest declines were for Bill Clinton, arguably the result of contemporary scorn for his treatment of women, and Andrew Jackson, for evolving attitudes on his treatment of Native Americans.

Counting only Republican votes, William McKinley — best known for winning the Spanish-American war, for defeating William Jennings Bryan twice in contests for the White House and for being assassinated by the anarchist Leon Czolgosz — holds a spot in the Top 10.

Trump doesn't get much of a lift from Republican-only vote: Even in their eyes, he’s a bottom-five president.