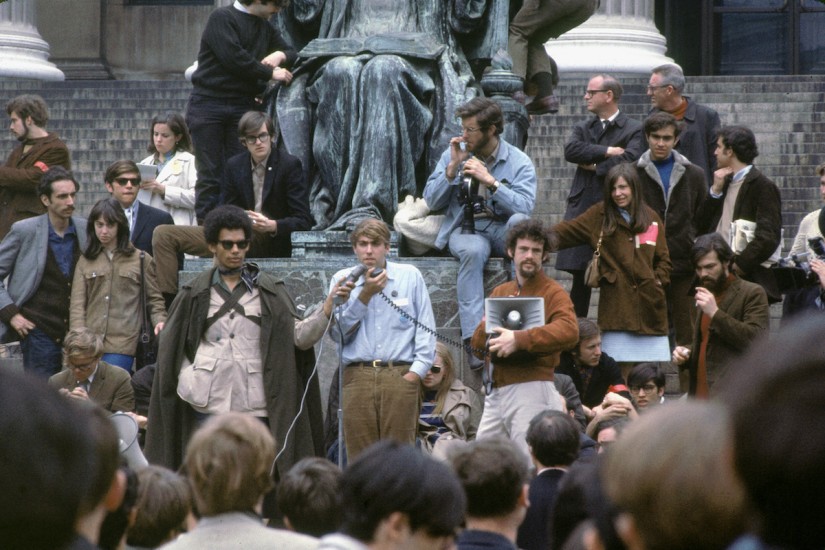 The campus of Columbia University is dotted with monuments to illustrious alumni and high-minded ideals. But on a sunny afternoon earlier this week, about two dozen people gathered around the sundial in its central plaza to pay tribute to a momentous event that has gone uncommemorated in stone.
“Horam expecta veniet — await the hour, it shall come,” Frank Guridy, an associate professor of history at the university, proclaimed, reading a Latin inscription on the sundial. “I think it’s sort of poetic that things began here.”

“Things” is an understatement for what began at Columbia around noon on April 23, 1968, when students, united by opposition to plans to build a university gym in a nearby public park and by Columbia’s involvement in weapons research, converged on that spot. A week later, nearly a thousand activists had occupied five buildings (including the president’s office), taken the dean hostage and shut down the campus, before being removed by the police in a violent melee that ended with one of the largest mass arrests in New York City history.

Anniversaries of Columbia 1968 tend to arrive like a classic rock hit, replayed nostalgically by those who were there. But it’s a story, Professor Guridy told the group of current students and former strikers who had gathered for a walking tour of sites relating to the protests, that is only now, as the 50th anniversary approaches, being fully understood.