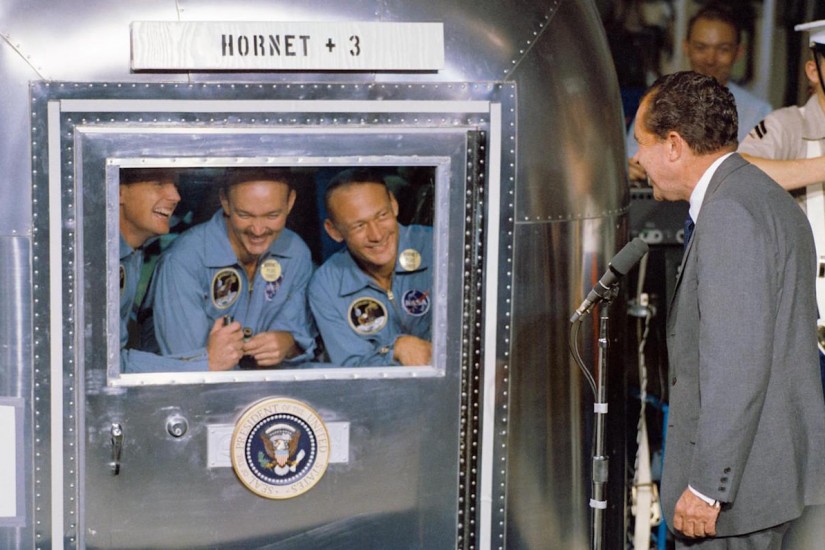 On the cratered surface of the moon, a small stainless steel plaque commemorates the remarkable visit made by “men from the planet earth” who “came in peace for all mankind” in the summer of 1969. It bears the name of the three men who made the journey, Neil Armstrong, Edwin Aldrin, and Michael Collins. And it features the name of one man who did not: President Richard M. Nixon.

This curious signature captures one earthbound president's successful yet controversial effort to use the publicity surrounding the moon landing to promote his own political agenda. Since the New Deal, presidents had attached their name to federal infrastructure programs. But Nixon's critics argued that this spectacular accomplishment was different. Because the endeavor reflected the vision and work of the two presidents before him, it “should not be treated like the kind of run-of-the-mill public works project,” argued one journalist. To do so would reflect a “narrow chauvinism.” Nixon occupied center stage with the astronauts of Apollo XI even so. An editorial writer for the New York Times described the tactic as “Nixoning the Moon.”

The moon landing thrilled Nixon, like it did millions of other Americans, even though it meant a fulfillment of his Democratic rivals' ambitions. The space mission began as a promise by John F. Kennedy to restore American pride and prestige in the race for technological prowess against the Soviet Union. Abetted by the growing scope of the Cold War presidency, the space program expanded further under Lyndon B. Johnson as a means to promote education and employment through the federal government. But the culmination of this bipartisan program would be distinctly Nixonian. More than an isolated publicity stunt, the moon landing encapsulated the thirty-seventh president's approach to politics—one that harnessed public relations and image as a central source of power. Nixon's lunar spectacle would be carefully crafted to cast himself as the star of the show, even if the show was physically out of this world.

On July 20, 1969, television screens flickered with the scene of Neil Armstrong stepping onto the moon as he proclaimed, “That's one small step for man, one giant leap for mankind.” But the next television image, like that stainless steel plaque, sent a different message. A split screen juxtaposed the astronauts on the moon with the sight of Richard Nixon in the Oval Office, making the “most historic telephone call ever.” With millions glued to their sets, the president intoned: “As you speak to us from the Sea of Tranquility, it inspires us to redouble our efforts to bring peace and tranquility to earth.”