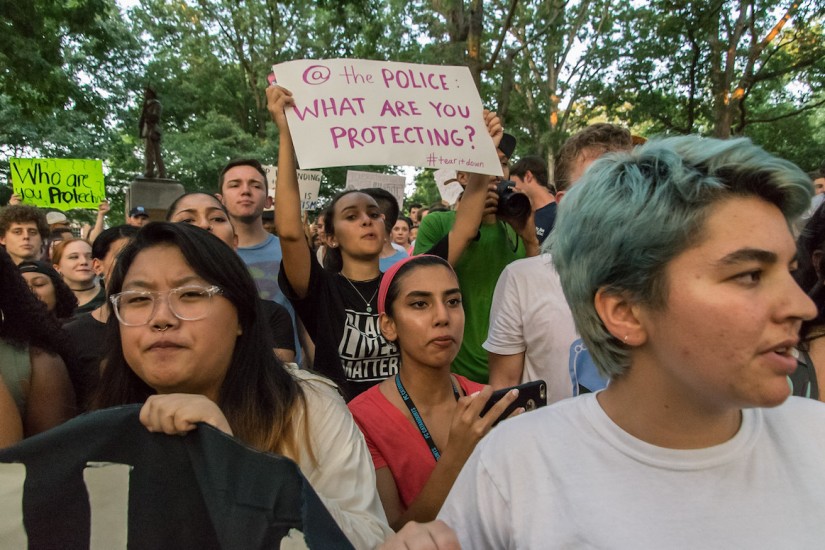 A graduate student named Maya Little recently re-baptized UNC-Chapel Hill’s Confederate monument (known as Silent Sam) in a mixture of her own blood and red ink. Little described her action as an “opportunity to teach.” Little, who is black, wrote, “Silent Sam is violence; Silent Sam is the genocide of black people; Silent Sam is antithetical to our right to exist.” She said, “We see our blood [on it] and now you will too.”

A century ago, the university allowed the United Daughters of the Confederacy to place the statue at the center of the university’s most public square. At its first “baptism,” the ceremony to dedicate the monument, a (white) Confederate veteran, university trustee, and wealthy industrialist named Julian Carr spoke words that are as haunting as Little’s. Carr praised Confederate veterans for “saving the very life of the Anglo-Saxon race. Praise God.”

In his dedication speech, Carr described his commitment to white supremacy in terms as personal as Little’s. Shortly after his return from Appomattox, Carr said, he “horse-whipped a negro wench” only 100 yards from the statue on the “quiet” streets of Chapel Hill, because the woman had reportedly “insulted and maligned” a “Southern Lady.” Carr’s audience knew which kind of “Southern Lady” to which he referred—not women like Maya Little. Or women like me.

Little’s choice of the color red resonated with me beyond what she articulated. It reminded me of my ancestors’ blood, shed for the Confederate cause, but also for their own cause. I belong to the Lumbee tribe of North Carolina, the largest American Indian nation east of the Mississippi, over 65,000 people. My ancestors were southerners before the South even existed. Many in my family tree resisted the Confederacy and remained pro-Union; my great-great-grandfather was executed for his part in this rebellion.