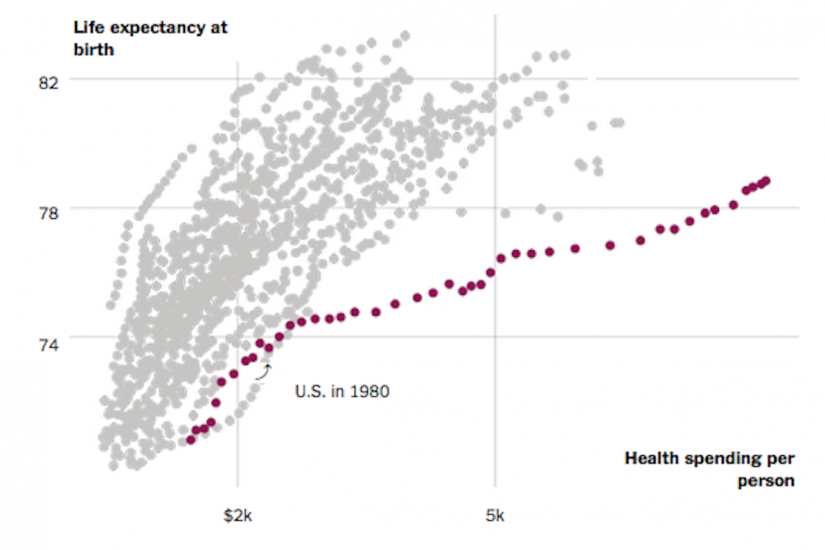 Life expectancy at birth (Y axis) and health spending per person (X axis). In most countries, more health spending coincided with much longer lives. But the U.S. diverged from peer nations around 1980.
Our World in Data/New York Times

The United States devotes a lot more of its economic resources to health care than any other nation, and yet its health care outcomes aren’t better for it.

That hasn’t always been the case. America was in the realm of other countries in per-capita health spending through about 1980. Then it diverged.

It’s the same story with health spending as a fraction of gross domestic product. Likewise, life expectancy. In 1980, the U.S. was right in the middle of the pack of peer nations in life expectancy at birth. But by the mid-2000s, we were at the bottom of the pack.

Health spending and life expectancy are not necessarily closely related, so it’s helpful to consider them separately.

“Medical care is one of the less important determinants of life expectancy,” said Joseph Newhouse, a health economist at Harvard. “Socioeconomic status and other social factors exert larger influences on longevity.”

For spending, many experts point to differences in public policy on health care financing. “Other countries have been able to put limits on health care prices and spending” with government policies, said Paul Starr, professor of sociology and public affairs at Princeton. The United States has relied more on market forces, which have been less effective.

“Confronted with fiscal pressures, as the share of G.D.P. absorbed by health care spending began to get serious, other nations had mechanisms to hold down spending,” said Henry Aaron, a health economist with the Brookings Institution. “We didn’t.”

One result: Prices for health care goods and services are much higher in the United States. Gerard Anderson, a professor at Johns Hopkins and a lead author of a Health Affairs studyon the subject, emphasized this point. “The differential between what the U.S. and other industrialized countries pay for prescriptions and for hospital and physician services continues to widen over time,” he said. Other studies also support this idea. However, by some measures, growth in the amount of health care consumed has also been a factor.