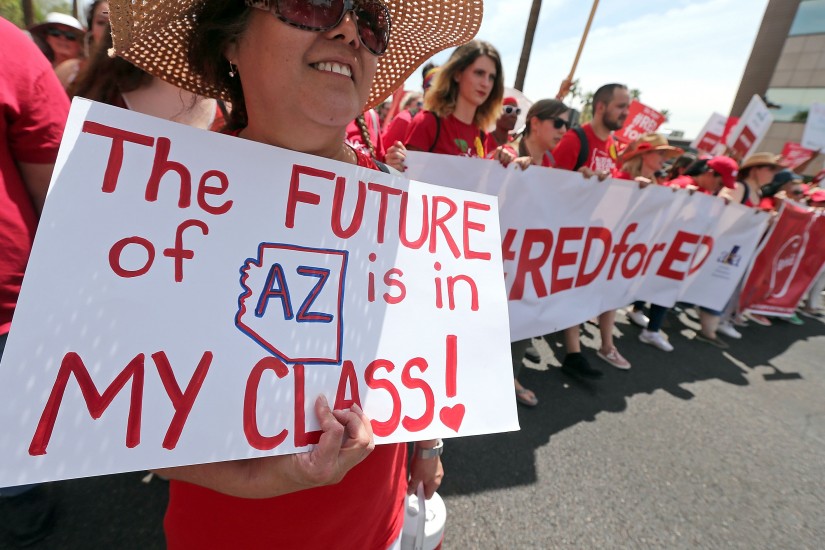 Arizona teachers march toward the State Capitol in Phoenix as part of a rally for the #REDforED movement on April 26, 2018.
Ralph Freso/Getty Images

They have taken to the streets in West Virginia, Oklahoma, Kentucky, Arizona, Colorado — and more recently in North Carolina. Dissent is building in Louisiana and Nevada, too.

But while the protests are spreading this year, the underlying conflict between public school employees and policymakers has roots in decisions made during the last recession, when states and local districts short of cash curtailed education spending for the first time in decades.

This had a pronounced effect on school staffing, with layoffs hitting many states. Districts cut support staff as well as regular classroom teachers. In North Carolina, the number of teachers is down 5 percent since peaking in 2009, while the number of teaching assistants is 28 percent lower. And teacher pay stagnated nonetheless.

Moreover, the recovery that has lifted the private economy has not quite restored school spending to pre-recession levels, especially in states run by fiscal conservatives determined to hold the line on government spending.

For a system that had experienced nothing but spending growth for a quarter century, the past few years have been a major shock. K-12 spending per pupil rose 26 out of 29 years before 2010, only to tumble three consecutive years at the beginning of this decade.

One reason for the consistent rise was a movement in education to reduce class sizes by adding teachers, and to provide more social services beyond basic instruction. These efforts picked up steam in the 1990s in part in reaction to publication of Jonathan Kozol’s “Savage Inequalities,” which documented the vast disparities in school spending between wealthy and poor school districts, spurring lawsuits and education reform movements in many states to equalize funding by enlarging the overall pot of education money.