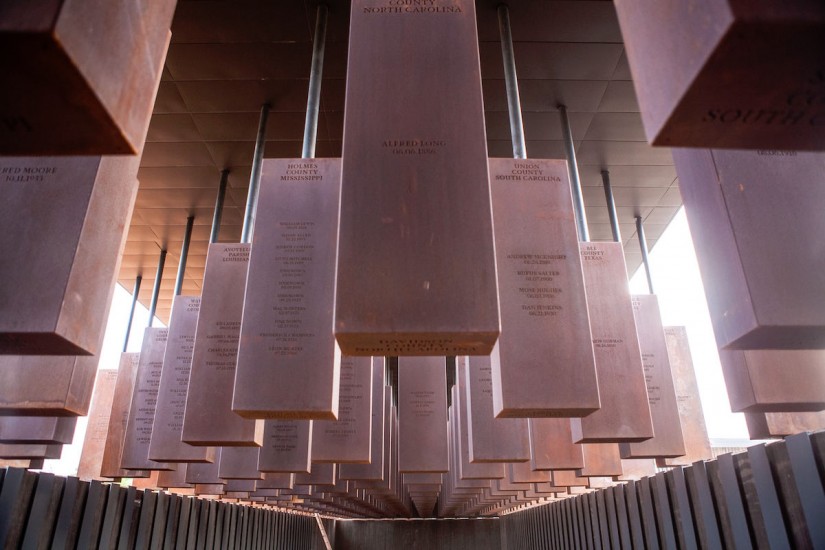 Inside the National Memorial for Peace and Justice, in Montgomery, AL.
Human Pictures/Equal Justice Initiative
…

Historically, accounts of the lynching of African-Americans appeared in regional newspapers but seldom made their way into the North-based mainstream press. Photographs were rarely published anywhere. (These existed, but usually circulated privately, sometimes as postcards.) The most visible alert New York City had of such killings came from the National Association for the Advancement of Colored People, which periodically flew a flag from its Fifth Avenue office window reading “A Man Was Lynched Yesterday.” Mostly, though, lynching met with public silence, which lasted a long time.

That silence has been decisively broken with the opening of the memorial and the museum. Both were created by the Equal Justice Initiative, a nonprofit legal advocacy group directed by Bryan Stevenson and based in Montgomery. Both address the subject of history in a way unusual until recently for American institutions: with a truth-telling, uplift-free prosecutorial directness. And both approach it by different means.

The Memorial for Peace and Justice does so visually, through its design. Conceived as a single immense installation, it’s dedicated to more than 4,000 African-Americans who were lynched by white Americans, and evokes their deaths in a language of stripped-down abstract sculpture. The Legacy Museum does its commemorative work in the opposite way, through an accumulation of detailed data, a near-overwhelming amount it, placing lynching within a broader context of white-on-black terrorism that goes back to the trans-Atlantic slave trade, in which Montgomery played a role, and forward to the warehousing of black men in prisons today.

Located on the site of a building that functioned as a holding pen for enslaved men and women, the museum stands halfway between the Alabama River port where new arrivals landed and the auction market at Court Square a few blocks uptown. The space isn’t large but it’s jam-packed with information — texts, photographs, videos and touch-screen animations — layered in a way that keeps your attention constantly on the move.