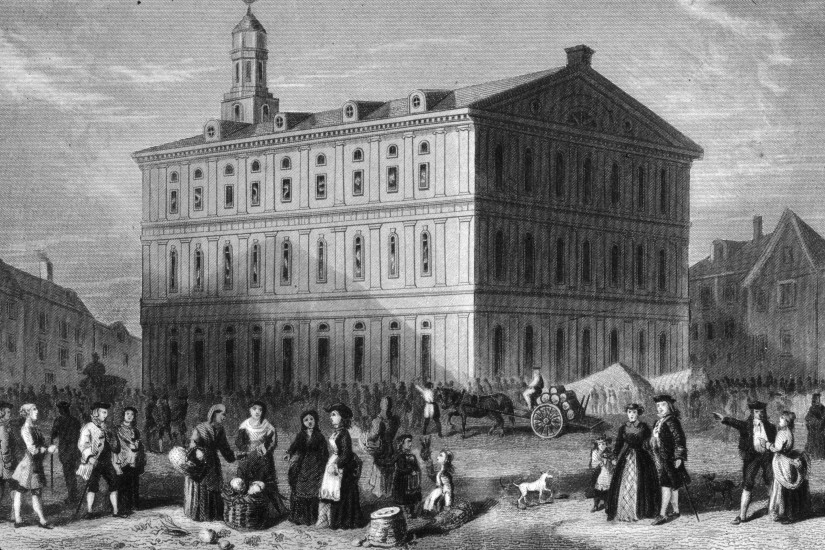 Crowds outside the Faneuil Hall in Boston in 1776.
Hulton Archive/Getty Images

The national wave of renamings of statues, monuments and parks that recall the days of slavery is lapping at Faneuil Hall, the historic Georgian brick meetinghouse in downtown Boston that is synonymous with revolutionary fervor and among the country’s most visited tourist attractions.

Since the 1740s, rabble-rousers — rebellious colonists, abolitionists and suffragists among them — have met in the building’s Great Hall. Susan B. Anthony, Frederick Douglass and John F. Kennedy have all spoken from its stage, and political rallies, debates and civic events still take place within its walls, making Faneuil Hall — pronounced “FAN-yul” — a living monument.

But its namesake, Peter Faneuil, one of the richest merchants in 18th century New England, was a slave owner. And he traded not only in sugar, molasses and timber, but in humans.

That has drawn the attention of some faith leaders and others who want to remove Faneuil’s name from the iconic landmark.

“Faneuil Hall insults the dignity of blacks and all Americans who believe in the civic dignity of all,” Kevin C. Peterson, founder of a group called the New Democracy Coalition, said in a statement.

Boston proudly reveres its history, but the city also wrestles with long-held perceptions that it is inhospitable to people who aren’t white, a sense reinforced last year when the comedian Michael Che called Boston “the most racist city I’ve ever been to.”

Much of that reputation stems from violence that erupted against court-ordered school busing in the 1970s. But it started before then and still persists, in everything from virulent bigotry at its sports stadiums to the city’s gaping income inequality, leaving Boston perpetually asking whether it can ever get past the stain of racism. For a city perceived as one of the nation’s bastions of liberalism, its relationship with issues of race is complex.