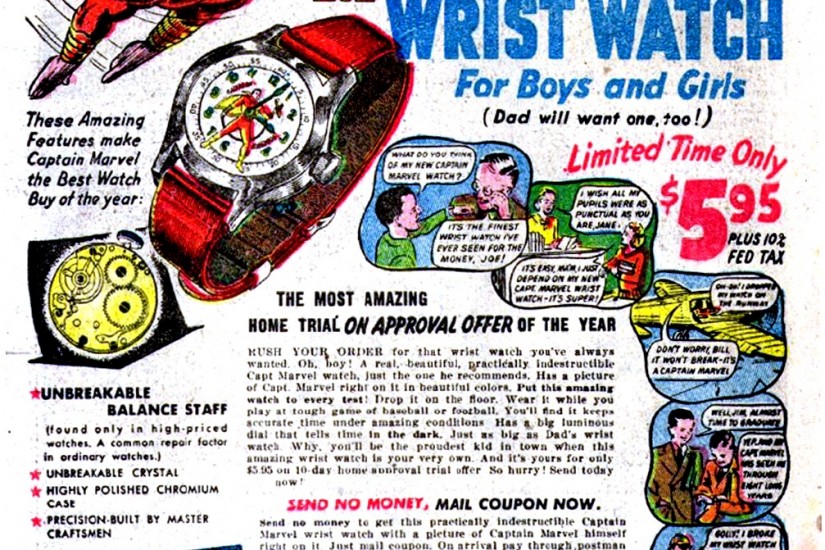 An advertisement for a Captain Marvel wristwatch that appeared in a Rulah comic book (1949).
Fox Feature Syndicate/Digital Comic Museum/Wikimedia

One thing has stayed consistent in Western World comic books, however, and that's the often bizarre advertisements. Referencing the early issues of Action Comics, widely considered to be the first superhero comic, there are barely any ads at all. It's not until the comic shifts from the '30s to the '40s, gaining international success, that we begin to see utilization of page space for ads.

In the beginning, these ads were what you might expect: a lot of brightly colored advertisements for candy and toys appearing sporadically all throughout the '40s. Things like a “Superman Ray Gun” and an “Exciting Ant Farm” could be bought with a dollar bill and a cutout coupon.

These ads would later go on to be the bane of comic collectors, with many surviving issues of the time period ravaged by scissors wielded by young kids looking to buy toys they could only get from comics. At the time, this was a world with no television, so ads for toys were found almost exclusively through magazines, newspapers, and radio programs. For some time, comics were one of the best venues for toy sellers to market their wares.

One recurring and ubiquitous ad was for the magazine Grit. Founded in the early 1880s, Grit is, somewhat surprisingly, still going today, catering to middle America with very little change in content over the last century and claiming itself to be America's "Greatest Family Newspaper." From the '40s to the '70s, ads for Grit would appear regularly in comics, not necessarily offering subscriptions but recruiting “newsboys” to sell their paper for them. There's little information on why this practice ceased, although one presumes it might have something to do with the increased focus on child labor laws in the '70s. Regardless, there was a gag in a Richie Rich comic citing that Richie himself sold Grit as a way of maintaining his fortune, and the newsboys were an integral part to the success of the paper for decades.

From the beginning, comics ran a lot of ads for toy guns. Many of those ads are cringe-inducing in the modern era, but definitely reflect plenty of American values over the last several decades. Often, ads featuring a young child holding a somewhat disturbingly realistic toy gun and firing it would appear via full-page ads in the middle of a story, released by any number of toy companies.