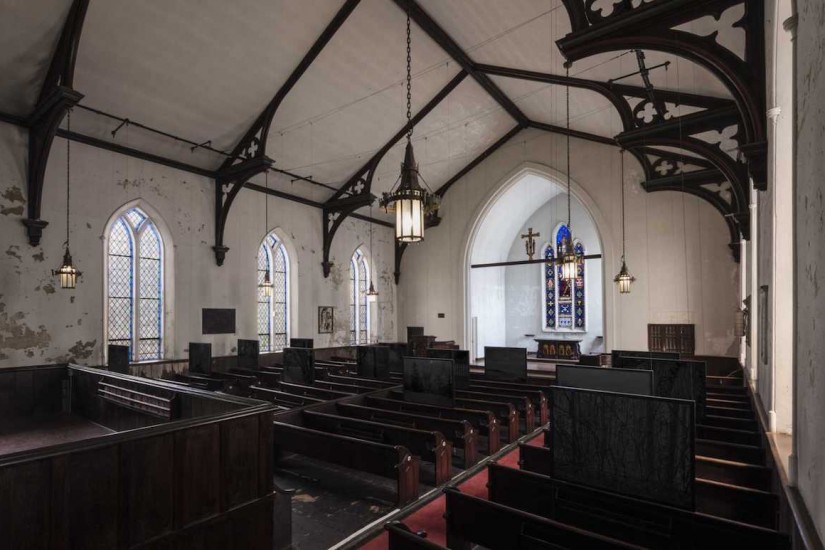 In his poem “Dream Variations,” published in 1926, Langston Hughes yearned for a time when the African-American worker, exhausted by the daily grind of hard labor and discrimination, might be truly free. This liberation, he imagined, would be achieved not in the glare of daylight, but rather under the brooding, protective cover of night. Inverting a dominant literary conceit, blackness and not whiteness functioned as a metaphor for hope and transcendence — a “Night coming tenderly/Black like me,” as Mr. Hughes wrote, that abetted the struggle for racial equality and justice.

This metaphor is central to a new series by the photographer Dawoud Bey, “Night Coming Tenderly, Black,” which draws on Mr. Hughes’s lyrical poem. The project, Mr. Bey’s contribution to the Front International: Cleveland Triennial for Contemporary Art (July 14 to Sept. 30), is site-specific. Installed in St. John’s Episcopal Church, a stop on the Underground Railroad known as Station Hope, it summons a time in African-American history when the journey to freedom was made largely through the shadows of the night.

Today, little visual evidence remains of the Underground Railroad, an antebellum network of secret routes and safe houses, maintained by brave black and white “conductors,” which facilitated the escape of slaves to free states and Canada. For Mr. Bey, whose work has often focused on urban environments, the challenge was to create images that evoke the history of largely rural areas. While he photographed sites in Cleveland, he sometimes found the city’s urban character inconsistent with the historical past. His research led him to the more rustic town of Hudson, Ohio, 30 miles southeast of the city, with areas of landscape that are little changed from the years before the Civil War and where several Underground Railroad stations remain.

“I wanted the photographs to almost involuntarily pull you back to the experience of the landscape through which those fugitive black bodies were moving in the 19th century to escape slavery,” Mr. Bey said. “So I had to learn, for the first time, how to make photographs in that kind of space.”

The photographs of “Night Coming Tenderly, Black” are among Mr. Bey’s most sensual and layered. In their splendor and mystery, they transform fields, bodies of water and houses shrouded in darkness into symbols of hope.