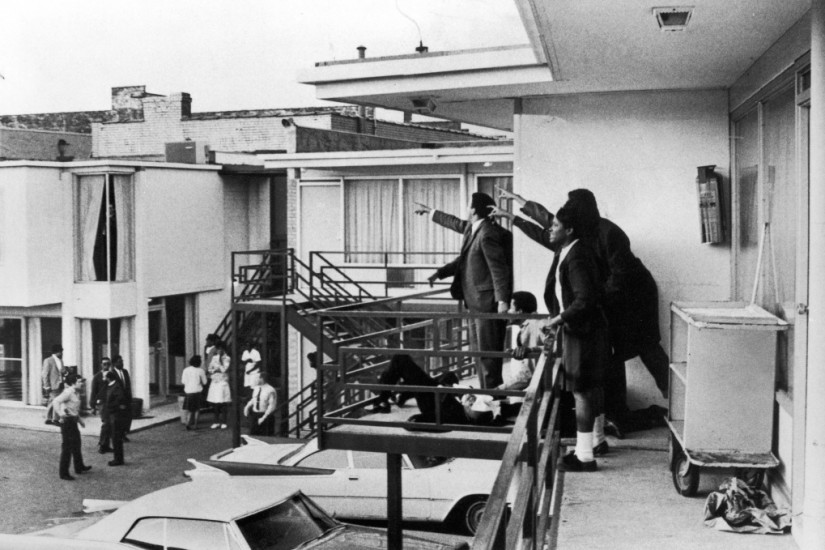 The Rev. Dr. Martin Luther King, Jr. lies at the feet of civil rights leaders on the balcony of the Lorraine Motel in Memphis after he was shot in April 1968.
Joseph Louw/The LIFE Images Collection/Getty Images
I’ve often wondered about the 10 file cabinets of domestic surveillance records that officials in the Memphis Police Department doused with fuel and burned in 1976, the year I was born. What portion was related to my father, Marrell McCollough?

He spied for the department from 1968 to 1972, spending part of that time as a mole in a local Black Nationalist group called the Invaders. The police were worried the group would interfere with garbage collection by strikebreakers during the 1968 sanitation strike. He was performing that role — dropping off two college students and an aide to the Rev. Dr. Martin Luther King, Jr. in the Lorraine Motel’s parking lot — when he found himself at the scene of Dr. Martin Luther King Jr.’s assassination. Dad is the man kneeling over Dr. King in the iconic photograph taken in the shooting’s aftermath.

When those files were destroyed, my family thought a painful episode in our history had come to an end. We were wrong.

A federal trial began Monday, Blanchard v. Memphis, in which the A.C.L.U. of Tennessee argues that the city spied on its citizens again, pairing old methods with 21st century technology.

This cuts deeply because of the Memphis Police Department’s notorious history of spying on its citizens. Memphis had burned most of its relevant files after an activist made a records request more than 40 years ago. Journalists soon discovered that the department had been spying on numerous people and organizations for years, probing their political activities and private lives. A federal court barred the destruction of any more records, but before the order could be served, the mayor ordered the incineration of the remaining files and disbanded the unit.

After two years of litigation, the city entered into a consent decree in 1978 — the first of its kind in the nation — prohibiting the government from “gathering, indexing, filing, maintenance, storage or dissemination of information, or any other investigative activity, relating to any person’s beliefs, opinions, associations or other exercise of First Amendment rights.”

Yet it appears that the Memphis police department has been doing just that.