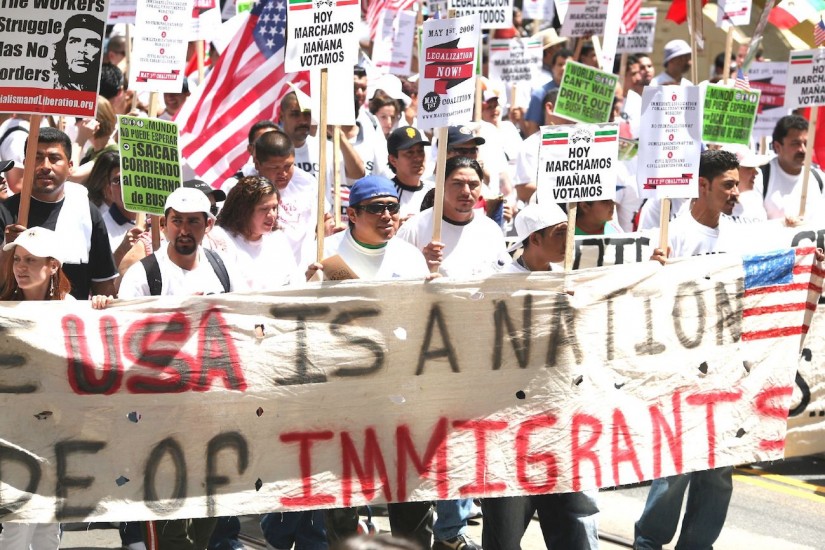 Protesters holding a sign that says "USA is a nation made of immigrants" (2006).
flickr.com/thomashawk

When Carlos Bulosan arrived in Seattle from the Philippines in 1930 at the age of 17, he quickly found that his vision of America didn’t match up with reality. He saw firsthand the disconnect between the hard, menial labor that immigrants performed—working in fields, canneries, and hotels—and what they got in return. He and his fellow Filipinos were shut out of unions, degraded by employers, and targeted by anti-immigrant violence. “Why was America so kind and yet so cruel?” Bulosan wrote in a semiautobiographical novel published in 1943, after he’d become an author and labor activist. “Was there no way to simplifying things in this continent so that suffering would be minimized?”

The answer seems to be no. The United States has always needed new workers to contribute to its economy, but it hasn’t always wanted them to settle down, making their status fluctuate between indispensable resource and burden on the economy. From the enslavement of Africans that began in the 17th century to the recent fights between Silicon Valley companies and the US government over the H-1B work visa, which permits companies to temporarily hire foreign workers, the country has a long history of recruiting foreigners—by invitation or by force—to relocate here and contribute to its economic success. But it has rarely made those workers feel welcome once they arrive.

Almost as soon as the first British colonizers arrived in North America in the 1600s, they began to exert control over who could live in their new communities—including the indigenous people who were, of course, already there. By the mid-17th century, colonial companies were bringing indentured servants from Europe and enslaving individuals from Africa to work in the growing tobacco, rice, and sugar industries. When immigrants arrived from other parts of Europe and North America in the 18th century, state leaders tried to preserve the white British colonial population through fearmongering and taxation of newcomers. Benjamin Franklin fretted over German immigration in an essay from 1751: “Why should Pennsylvania, founded by the English, become a Colony of Aliens, who will shortly be so numerous as to Germanize us instead of our Anglifying them, and will never adopt our Language or Customs, any more than they can acquire our Complexion.”