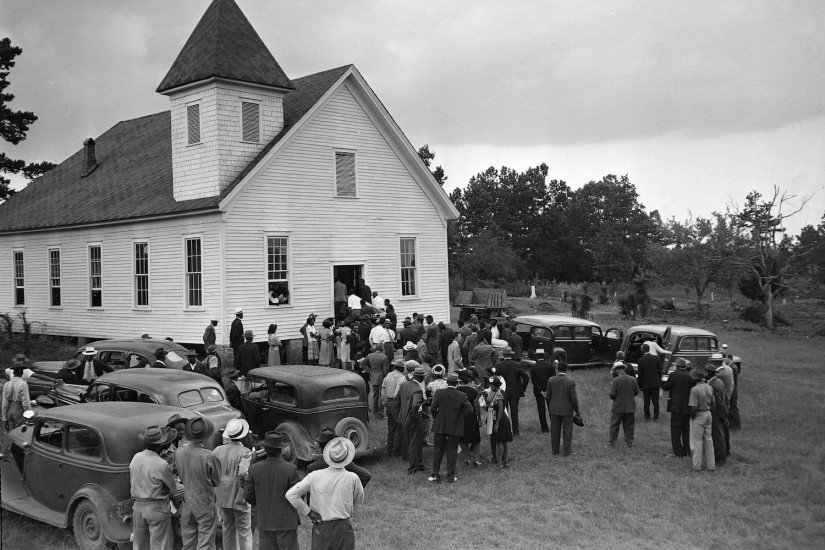 A crowd gathers at the Mt. Perry church near Monroe, GA, for the funeral of George Dorsey and Dorothy Malcolm, two of the four victims of a lynch mob. July 28, 1946.
Associated Press
…
Some historians have traced the Moore’s Ford Bridge murders to Georgia’s hate-filled 1946 Democratic Party primary for governor — the first after a federal court invalidated the all-white primary system, allowing African-Americans to vote. Eugene Talmadge race-baited throughout the campaign, essentially promising to reinstate the whites-only system and warning white voters that if black people were allowed to vote, they would overturn laws requiring segregation in schools, trains and hotels. As Laura Wexler shows in the book “Fire in a Canebrake: The Last Mass Lynching in America,” Mr. Talmadge visited Walton County just a few weeks before the election and ominously warned Negroes “to stay home and not attempt to vote.”

So race hatred was inflamed in July of that year, when Mr. Malcom was charged with stabbing a white farmer during a fight. A white landowner for whom the Malcoms and the Dorseys sharecropped was driving the couples back to his farm after posting Mr. Malcom’s bond when a mob seized the four African-Americans, tied them to a tree and riddled their bodies with bullets.

Members of the mob wore no masks, but the farmer said he could not identify any of them. Black sharecroppers, who were virtually owned by white farmers for whom they worked, were terrified to say if they had seen anything.

As J. Edgar Hoover, the F.B.I. director at the time, later said: “The arrogance of the … white population was unbelievable and the fear of the Negroes was almost unbelievable.” Despite Mr. Hoover’s disgust at the white wall of silence, Ms. Wexler says, the F.B.I. failed to vigorously pursue crucial evidence showing that the local sheriff had known of the threats to Mr. Malcom’s life before the lynching and had taken no steps to protect him.

In the end, she wrote: “Twenty-five F.B.I. agents, four months of investigation, 2,790 people interviewed, 106 people subpoenaed before the grand jury — and then no indictments. The federal government had responded to the worst incident of racial violence since the end of World War II with the most massive lynching investigation in the country’s history. And yet there was still no justice.”