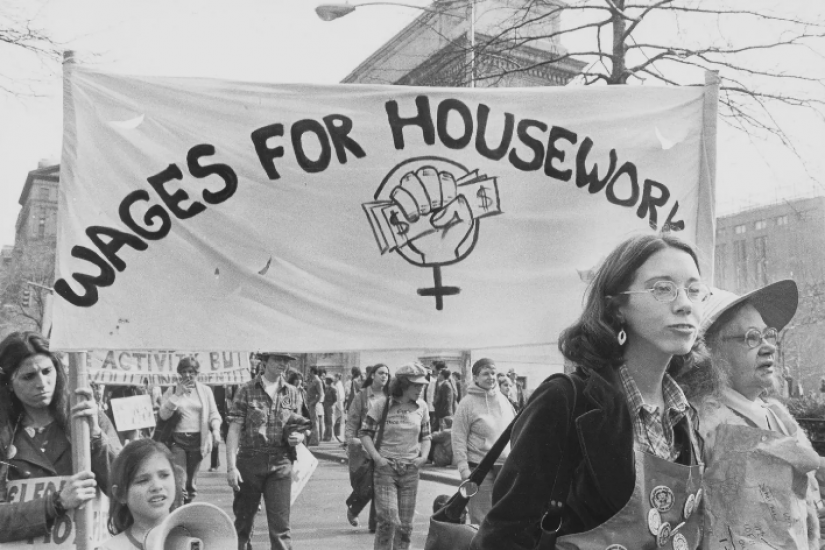 Demonstrators march under the Wages for Housework banner on International Women's Day, 1977.
Bettye Lane/Schlesinger Library on the History of Women in America

In her 1970 essay “The Politics of Housework,” Pat Mainardi, a member of the radical feminist group Redstockings, lays out a step-by-step guide to persuade men to do their fair share of “dirty chores” around the house. Mainardi explains that her husband “would stop at nothing to avoid the horrors of housework.” Instead, she writes, he offered her excuses: “I don’t mind sharing the housework, but I don’t do it very well,” and “You’ll have to show me how to do it.” So Mainardi provides a list, a way to train her husband, which also serves as a primer for women to put men to work. “Keep checking up. Periodically consider who’s actually doing the jobs … Alternate the bad jobs. It’s the daily grind that gets you down.”

Despite the practical advice, a sense of futility pervades the piece. (“He won’t do the little things he always did because you’re now a ‘Liberated Woman,’ right?”) At the end of the 2,000-word essay, Mainardi signs off with the following: “I was just finishing this when my husband came in and asked what I was doing. Writing a paper on housework. ‘Housework?’ he said. ‘Housework? Oh my god, how trivial can you get?’”

By the mid-20th century, housework had undergone a dramatic revolution. Many of the tasks that had once consumed a homemaker’s day were transformed by technological innovation. Items once crafted by hand could now be bought off the rack; meals that once required extensive preparation were replaced by processed and prepared foods. Dishwashers, washing machines, and vacuum cleaners rendered clean-up a cinch.

Yet while a woman could become an accomplished homemaker and mother, she’d never receive the same level of praise, adulation, and respect as a husband who worked outside the home. For some second-wave feminists in the 1970s, this gap in respect was an obvious place to begin their fight for equality.

According to more mainstream feminists like Betty Friedan and Gloria Steinem, the answer was to put women on the same footing as men, liberate them from the shackles of their kitchens, and send them into the workforce, where they’d be able to compete with men on a level playing field. But for a small group of Marxist feminists, this strategy completely missed the point. The problem, they argued, was never with housework itself. The problem was that housework had never been truly respected as work.