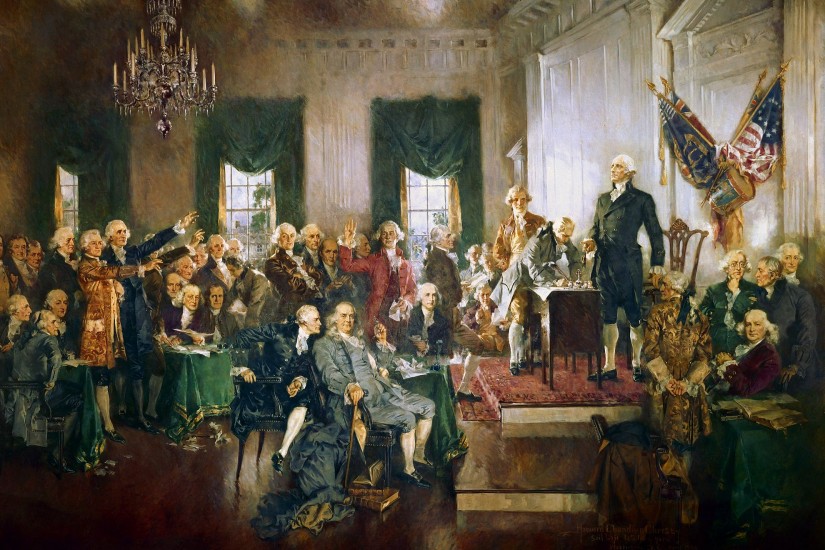 "Scene at the Signing of the Constitution of the United States" by Howard Chandler Christy (1940).
Wikimedia Commons
…

For five decades, conservatives have claimed the moral high ground in judicial matters, claiming that they are simply interpreting the Constitution as it was written by our Founding Fathers—what they call an originalist approach. But conservative justices’ decisions are no less shaped by their worldview than progressives’.

In 2008, for instance, for the first time in U.S. history, the five conservative justices on the Roberts court declared a local gun control ordinance to be unconstitutional—a violation of the Second Amendment. In 2010, these same justices found that corporations have the right to spend unlimited amounts of money in election campaigns. In 2013, they invalidated a federal civil rights law in the area of race—a key provision of the Voting Rights Act of 1965—for the first time since the 19th century.

By any measure, all these cases were based on the ideology and values of the conservative Republican justices, not the text or the original meaning of the Constitution. It is laughable to say that the framers of the First Amendment intended that corporations should be able to spend unrestricted sums from their campaign treasuries to get candidates elected or defeated. Those who wrote the First Amendment did not envision campaign spending as it exists today, let alone modern corporations. Additionally, each decision-overruled precedent invalidated a law that was enacted with overwhelming support, broadly decided a matter when a narrow ruling was possible, and did so to advance conservative political values.

The first step must be to refute the conservatives’ legal notion of “originalism,” whereby all constitutional issues, including such controversial questions as the death penalty or affirmative action, can be resolved based solely on the original text of the Constitution and its meaning at the time it was written. Conservatives maintain that this allows justices to decide cases without imposing their own values. That is nonsense. There is no such thing as “value-neutral judging.” It is a myth that conservatives have advanced for decades and continue to espouse for their own purposes.