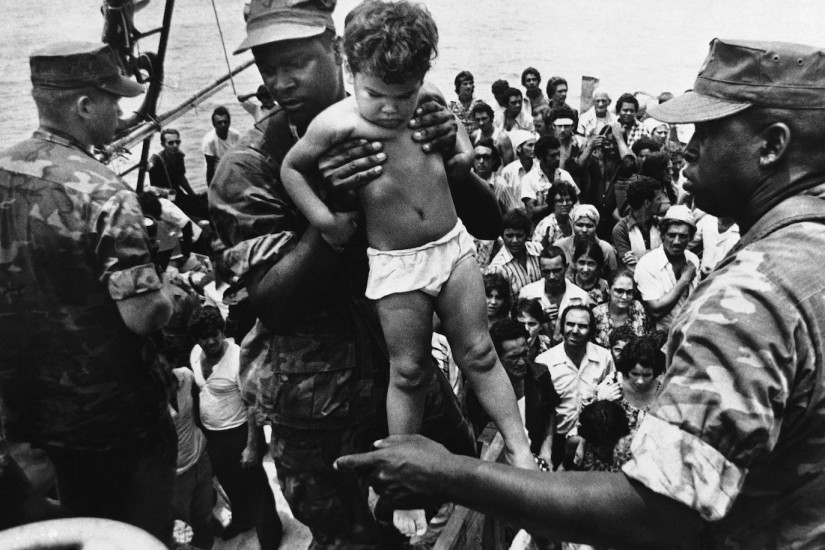 A U.S. Marine helps a young Cuban child off a refugee boats during the Mariel Boatlift, May 10, 1980.
Fernando Yovera/Associated Press

Last Sunday, as Border Patrol agents were tear-gassing Central American asylum seekers, including parents with their toddlers, more than 40,000 other migrants were being held in detention facilities across the United States.

Like the Trump administration’s “zero tolerance” policy enacted earlier this year, which separated children from their parents while in detention, the tear-gassing of Central Americans immediately gripped the nation’s attention and was decried by many as inhumane. There was almost no mention of the fact that if these migrants did ever manage to cross the border and apply for asylum, many of them would end up in some form of detention or other.

But detaining migrants was not always seen as normal. On the contrary, immigration detention has a short-lived and
complicated history.

The United States first imposed immigration detention in the late 19th century. But by the early 1950s, detaining migrants no longer seemed necessary. European and Asian migration had fallen drastically as a result of the Immigration Act of 1924 and the Great Depression. In 1954, officials from the Immigration and Naturalization Service concluded that a vast majority of migrants could be released on conditional “parole,” while their cases were being reviewed. Detention was reserved for migrants who were deemed likely to abscond or who posed a threat to national security or public safety. By January 1955, only four people in immigration custody were seeking entry into the country.

Reflecting on this change, in 1958 the Supreme Court, in Leng May Ma v. Barber, held that “physical detention of aliens is now the exception, not the rule,” pointing out that “certainly this policy reflects the humane qualities of an enlightened civilization.”

How did we move so far away from the notion that detention — and not just family separation and tear-gassing — is inhumane? How did holding more than 40,000 migrants behind bars come to be seen as normal?

The answer lies with the migration of Cubans and Haitians in the 1980s. The change was prompted by the Mariel Boatlift, when approximately 125,000 Cubans fled for the United States in a highly politicized migration that garnered national and international media attention and inspired fear among many Americans.