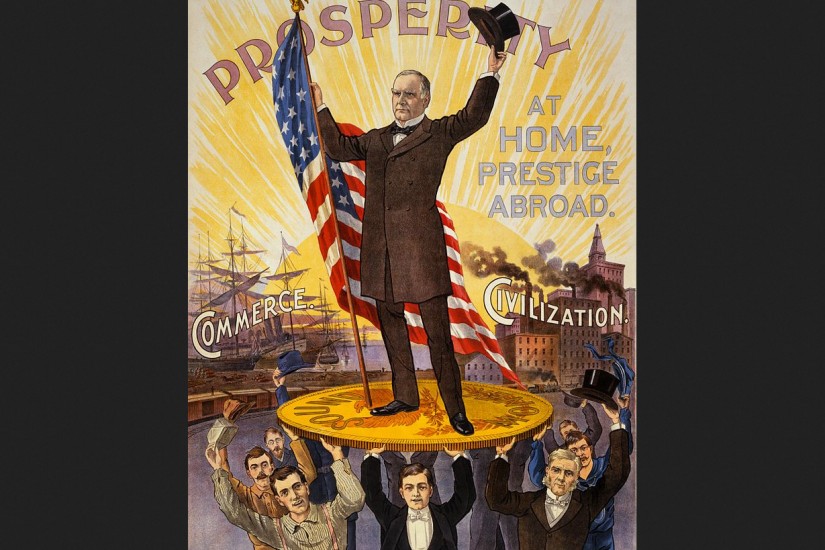 A campaign poster featuring William McKinley holding U.S. flag and standing on gold coin ("sound money"), held up by group of men in front of ships of "commerce" and factories of "civilization." (ca. 1897).
Library of Congress

His political fortunes rose with a protectionist promise. And then after he muscled his agenda through Congress, his party paid a price in the next election.

William McKinley is America’s original “Tariff Man” — in fact, during his 1896 presidential bid, he became known for saying, “I am a tariff man standing on a tariff platform.” President Trump has been quick to cite the former president’s views on tariffs while he wages his trade war.

“Free trade gives to the foreign producer equal privileges with us,” McKinley, a Republican, said in an 1892 speech in Nebraska. “It invites the product of his cheaper labor to this market to destroy the domestic product representing the higher and better-paid labor of ours. It destroys our factories or reduces our labor to the level of theirs.”

Mr. Trump uses blunter language. In calling the Trans-Pacific Partnership a “rape of our country,” he made clear that he, too, opposed free trade.

McKinley favored high tariffs on goods like steel, iron, glass, wool, sugar and beans as a way to protect and expand American industry. It was a divisive issue split largely along party lines —though in McKinley’s day, Republicans generally represented manufacturers in the North and Midwest while the agriculturally focused South was a Democratic stronghold.

History may not be repeating itself exactly, but there are distinct echoes of the late 19th century early into the 21st. An examination of how McKinley’s policies evolved can offer some insight into our own political climate.

Tariffs on exports were the central issue in the presidential election, and Grover Cleveland, a Democrat promising to lower barriers to free trade, won the popular vote. But Benjamin Harrison, a Republican and staunch protectionist, prevailed in the Electoral College.
This set the stage for already-high tariffs to surge even higher. Members of Congress treated the election result as a referendum on tariff reform. McKinley, then a congressman from Ohio, was poised to act.

According to Robert W. Merry, author of “President McKinley: Architect of the American Century,” McKinley wanted to leave his mark on politics and was advised that the best way to do so was to focus intensely on one issue.

He decided to toe what was then the Republican line: unwavering support for high tariffs.