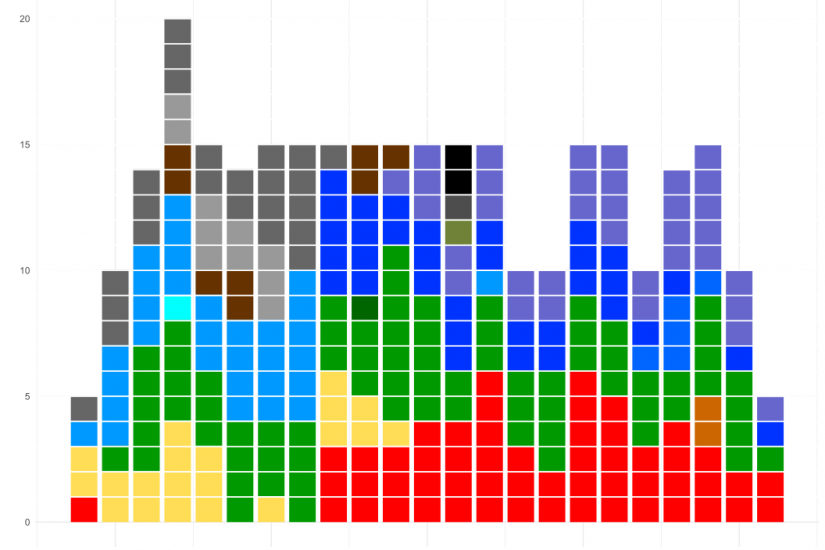 Graphs display the progression of colored sweaters Fred 'Mister' Rogers, the host of "Mister Rogers' Neighborhood", wore during his television show from 1979 to 2001.
Owen Phillips/The Awl

While y’all were watching the world fall apart this week, I was watching Fred Rogers build it back up. For the past few days I’ve been transfixed by the “Mister Rogers’ Neighborhood” marathon that began on Monday afternoon over on Twitch. Like watching the “Joy of Painting” with Bob Ross, zoning out to “Mister Rogers” is an exercise in escapism. After Rogers helped reset my brain I began to wonder about all the handsome, colorful sweaters he famously wore. Did Rogers have a favorite?

Fortunately, Tim Lybarger, a 40 year-old high school counselor from just outside of Champaign-Urbana, Illinois, wondered the same thing a few years ago. Back in 2011, on his blog devoted to all things Mister Rogers, neighborhoodarchive.com, Lybarger recorded the color of every sweater Rogers wore in each episode between 1979 and 2001. “When I realized such a resource didn’t exist,” Lybarger told me over email, “I just felt like somebody needed to do it…might as well be me.”

The chart below uses the data Lybarger meticulously collected to show how Rogers’ preferences for the color of his cardigan changed over time.

Each square represents an episode and the approximate color (designers don’t @ me) of the sweater that Rogers wore. There were three episodes during this stretch when Rogers went without a sweater.

Some sweaters were worn once and then never again, like the neon blue cardigan Rogers wore in episode 1497. Others, like his harvest gold sweaters, were part of Rogers’ regular rotation and then disappeared. And then there were the unusual batch of black and olive green sweaters Rogers wore exclusively while filming the “Dress-Up” episodes in 1991. To this day, members of the Neighborhood Archive message board claim those are the only sweaters Rogers wore that were store bought. The rest were hand knit by his mother.

As a ’90s kid, I associate Rogers with his red cardigan more so than any other sweater, so it was surprising for me to see that green is actually the color he favored the most — edging out red by a total count of 74 to 54. It turns out though, Rogers was red-green colorblind, so I like to think that some punk PA was messing with him and told Rogers they were both different shades of brown.

A noticeable pattern also shows up when you lay out the color of each sweater Rogers wore chronologically: Over time, Rogers ditched the pastels for darker, more saturated tones.

Before every Urban Outfitters in the world was stocked full with cardigans, Rogers made them his signature accessory. His fashion-forwardness should inspire Mark Zuckerberg, the modern poster boy of the “work uniform” movement, to try and dress a little less like a ...

View on The Awl
View Connections