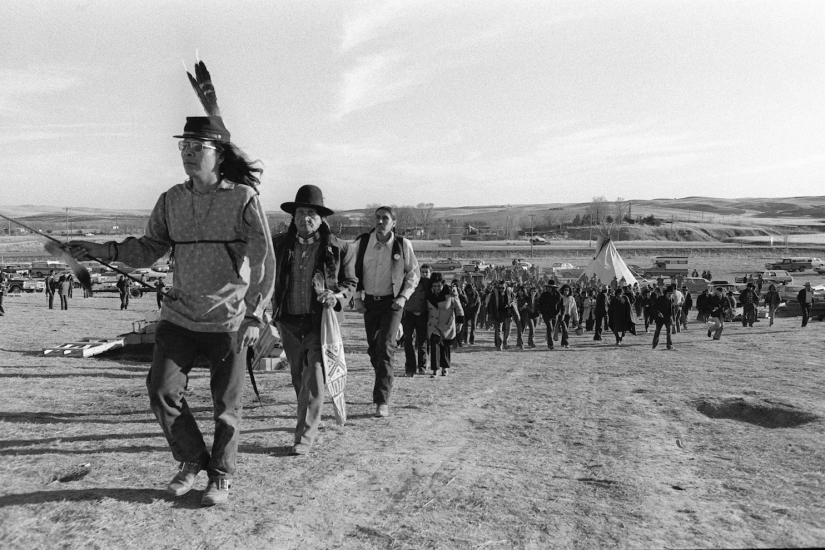 Members of the Oglala Sioux tribe march to the cemetery where their ancestors were buried following the 1890 massacre at Wounded Knee (March 10, 1973).
DT/Associated Press
…

During an era known as “Self-Determination,” Indian tribes and their citizens have changed not only their particular nations but also the larger nation around them. Though still poorly understood, this era emerged from urban and reservation activism in the 1960s and ’70s, when community leaders, students and veterans, among others, challenged onerous policies that had aimed to assimilate tribal communities. The Self-Determination Era has now grown in prodigious ways and yielded countless examples of achievement across Native North America, including the elections of Haaland and Davids as the first American Indian women ever elected to Congress.

“The Heartbeat of Wounded Knee,” by David Treuer (Ojibwe), examines these recent generations of American Indian history. Through memoir, interviews and extensive reading, Treuer counters the familiar narratives of invisibility that have so readily frozen America’s indigenous peoples. Interweaving stories from family members, the voices of policymakers and assessments of contemporary youth culture, the book introduces alternative visions of American history. The result is an informed, moving and kaleidoscopic portrait of “Indian survival, resilience, adaptability, pride and place in modern life.” Rarely has a single volume in Native American history attempted such comprehensiveness.

A noted novelist, Treuer takes his title from the celebrated work “Bury My Heart at Wounded Knee,” by Dee Brown. Published in 1970 at the height of the activist movements, Brown’s reassessment of the 19th-century wars between Indians and the federal government resonated with a generation of Americans. Achieving its narrative crescendo with the Wounded Knee Massacre of 1890, when the Seventh Cavalry was said to have exacted revenge for Custer’s defeat at the Little Big Horn, Brown’s text fueled growing outrage against injustices perpetuated by the federal government. It was a history that reached beyond its subject and helped to define an era. It has remained in print ever since.

To many, Brown’s history inverted accounts of the American West. It substituted Euro-American quests for frontier freedom with those of American Indians “who already had it.” The problem was that in place of Indian vilification Brown offered victimization. Despite their nobility and fortitude, he suggested, Indians were still defeated. In his telling, Native history became a slow, inexorable decline toward disappearance. Twentieth-century “poverty, hopelessness and squalor,” he wrote, were the outcomes for peoples who had lost and who remained lost.