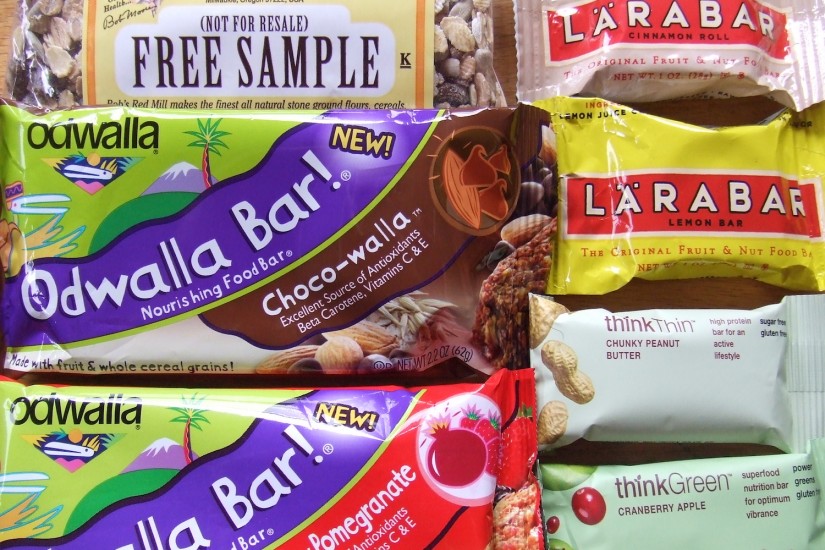 A sampling of different protein and energy bars (2008).
flickr.com/hvc
…

Protein and energy bars may now seem so ubiquitous as to be mundane. But they once represented loftier goals—those of exploration, expansion, and progress. One of the first people ever to be filmed eating an energy bar was wearing a space helmet while he did it, in an American television ad released circa 1970. It shows a white man in a white astronaut suit unwrapping what looks like an anemic Tootsie Roll, strangely dexterous with the wrapper despite his bulky space gloves. He leans back; without taking off his helmet, he sticks the unwrapped rod through a port in the front of it and into his mouth.

The product was called Space Food Sticks, and it came in six flavors: chocolate, caramel, mint, malt, orange, and peanut butter. A voice-over explained that the sticks had been developed by Pillsbury for United States moon missions; it promised “lasting energy, to feel alive,” and announced that you could find one at your local supermarket, “next to the instant-breakfast section.”

Space Food Sticks were the first government-sanctioned energy bars to be sold in supermarkets. They were also a flop: they were off the shelves by the mid-1970s. Even so, their arrival was a watershed moment for American snacks, though the “snack” in question looked barely edible. Created as a contingency food‚ something designed to keep astronauts alive in case of an emergency, Space Food Sticks descended from a long line of military-industrial food-tech adoption and innovation.

Early American colonists and traders had eaten pemmican, an indigenous food made from compressed meat and rendered fat, and by the 1890s the American military was trying to increase pemmican’s appeal by adding chocolate. In the late 1930s, the military hoped to invent a kind of fortified chocolate bar that would be palatable enough for its troops but not so palatable that soldiers would eat them for fun. Just in time for World War II, the Hershey Company took up the challenge—and the lucrative defense contract—and invented the “D ration”: extremely dense chocolate bars wrapped in sets of three, containing a total of 1,800 calories. Hershey made a less melty Pacific-theater edition, too, called the Tropical Bar; and in 1990, it debuted the Desert Bar, engineered to withstand Kuwaiti heat. (This one was also sold to the public, but not successfully.)

Then came the PowerBar.