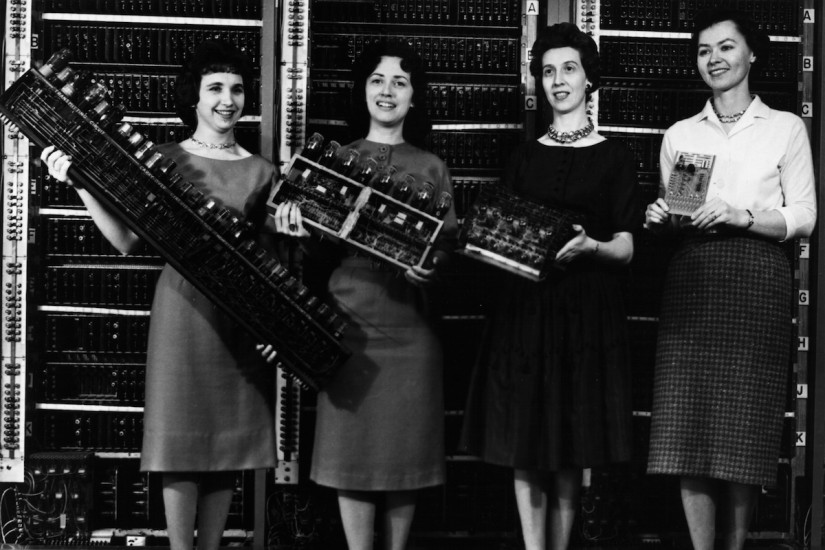 L-RL Patsy Simmers, Gail Taylor, Milly Beck, Norma Stec, holding the first four computer boards in the 1940s.
ARL Technical Library/U.S. Army
…
If we want to pinpoint a moment when women began to be forced out of programming, we can look at one year: 1984. A decade earlier, a study revealed that the numbers of men and women who expressed an interest in coding as a career were equal. Men were more likely to enroll in computer-science programs, but women’s participation rose steadily and rapidly through the late ’70s until, by the 1983-84 academic year, 37.1 percent of all students graduating with degrees in computer and information sciences were women. In only one decade, their participation rate more than doubled.

But then things went into reverse. From 1984 onward, the percentage dropped; by the time 2010 rolled around, it had been cut in half. Only 17.6 percent of the students graduating from computer-science and information-science programs were women.

One reason for this vertiginous decline has to do with a change in how and when kids learned to program. The advent of personal computers in the late ’70s and early ’80s remade the pool of students who pursued computer-science degrees. Before then, pretty much every student who showed up at college had never touched a computer or even been in the room with one. Computers were rare and expensive devices, available for the most part only in research labs or corporate settings. Nearly all students were on equal footing, in other words, and new to programming.

Once the first generation of personal computers, like the Commodore 64 or the TRS-80, found their way into homes, teenagers were able to play around with them, slowly learning the major concepts of programming in their spare time. By the mid-’80s, some college freshmen were showing up for their first class already proficient as programmers. They were remarkably well prepared for and perhaps even a little jaded about what Computer Science 101 might bring. As it turned out, these students were mostly men, as two academics discovered when they looked into the reasons women’s enrollment was so low.

One researcher was Allan Fisher, then the associate dean of the computer-science school at Carnegie Mellon University. The school established an undergraduate program in computer science in 1988, and after a few years of operation, Fisher noticed that the proportion of women in the major was consistently below 10 percent. In 1994, he hired Jane Margolis, a social scientist who is now a senior researcher in the U.C.L.A. School of Education and Information Studies, to figure out why. Over four years, from 1995 to 1999, she and her colleagues interviewed and tracked roughly 100 undergraduates, male and female, in Carnegie Mellon’s computer-science department; she and Fisher later published the findings in their 2002 book “Unlocking the Clubhouse: Women in Computing.”

What Margolis discovered was that the first-year students arriving at Carnegie Mellon with substantial experience were almost all male.