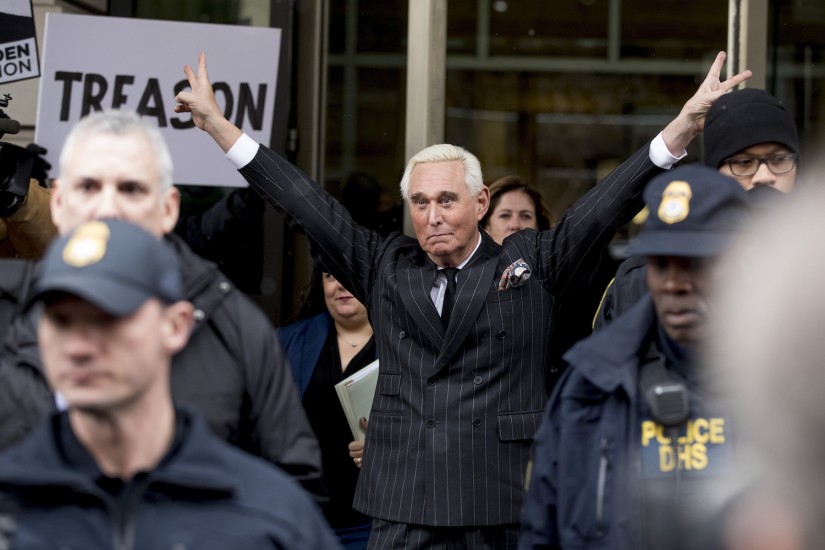 Stone fetishizes Nixon the way a Goth kid fetishizes the Crow. He began his political career as a Nixon volunteer and is so performatively devoted to his disgraced hero that he has the man’s jowly face tattooed on his own back. This Nixon worship feels like Stone’s version of Churchillian defiance: In the face of terrible obstacles (democracy, civility, rule of law), Stone will remain nobly uncowed. Of course he would spend this moment in the spotlight doing Nixon cosplay. It was like a kid seeing himself on the Jumbotron — on some cellular level, he just has to dab.

To quote something, however, is inevitably to change it. Examine clips of Nixon and Stone side by side, and it is clear that the men inhabit different worlds. Nixon stands alone above the watching crowd, and the gravity of the scene is almost unbearable; the supporters on the White House lawn look like mourners. First he waves at them, and when his Vs arrive, his hands fly out suddenly, like doves fluttering from his sleeves, and his suit jacket puckers and strains against the motion. Then he is gone.

Stone’s reprise, naturally, carries much less historical weight. His gesture almost gets lost in the crowd. He has to angle his arms up very high to be seen, and instead of holding his fingers steady, as Nixon did, he waggles them around, just to make sure we all get it. Nixon looked like a pope on a balcony — elevated, isolated, imperious. Stone looks like a kid trying to get a radio signal with a tinfoil antenna. The gesture is premeditated and insistent. He actually makes it twice, first at the beginning of his appearance and then again at the end. The people around him are hardly even paying attention: They mill around, discussing other things. Even those holding up their cellphones look bored. It is a perfect little modern tableau: witnesses recording an act of desperate provocation, with limited interest themselves, mainly so they can show it to everybody else.