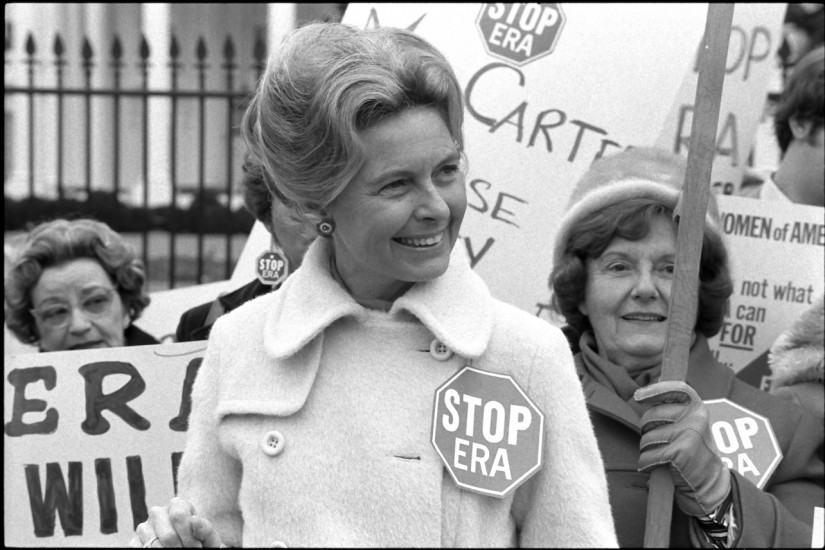 Phyllis Schlafly demonstrates against the Equal Rights Amendment in front of the White House, February 4, 1977.
Library of Congress

When Phyllis Schlafly crusaded against the Equal Rights Amendment in the 1970s as a threat to all-American motherhood, she handed out freshly baked bread and apple pie to state legislators. She warned of a dystopian post-E.R.A. future of women forced to enlist in the military, gay marriage, unisex toilets everywhere and homemakers driven into the workplace by husbands free to abandon them.

The E.R.A., which had been sailing to ratification, failed. Yet gay marriage is now the law. Women in the military see combat, although women are not required to register for the draft. Six women — so far — are running for president. A record-shattering number of women have claimed seats in Congress. And the percentage of prime-working-age women participating in the labor force has soared from 51 percent in 1972, when Congress passed the E.R.A., to more than 75 percent last year.

So what protections did American women earn without a constitutional amendment? Did the country get everywhere the people pushing for the amendment wanted it to go? These questions, once theoretical, are newly relevant with a push to revive the Equal Rights Amendment. It was left for dead in 1982, when three states failed to ratify it by a congressionally imposed deadline, leaving it short of the necessary three fourths of the states needed for ratification. But in the past two years, Nevada and Illinois have ratified the amendment. In Virginia, campaigners are pushing the state to ratify the amendment before the legislative session ends on Feb. 23, though ratification is a long shot.

Mrs. Schlafly may not have been able to prevent social changes that transformed the lives of American women, but she did drive a wedge between conservatives and liberals that remains today. “She was one of the early architects of class conflict as expressed through culture wars, as a way to stop the progress of the equality ideals of the professional management elite,” said Joan C. Williams, a feminist legal scholar skeptical about the usefulness of the Equal Rights Amendment. “One of the ironic messages of the E.R.A. is not to underestimate the power of ‘bathroom anxiety’ in pushing the country to the right.”

Some of the very arguments Mrs. Schlafly deployed decades ago resurfaced in the recent state legislature debates.