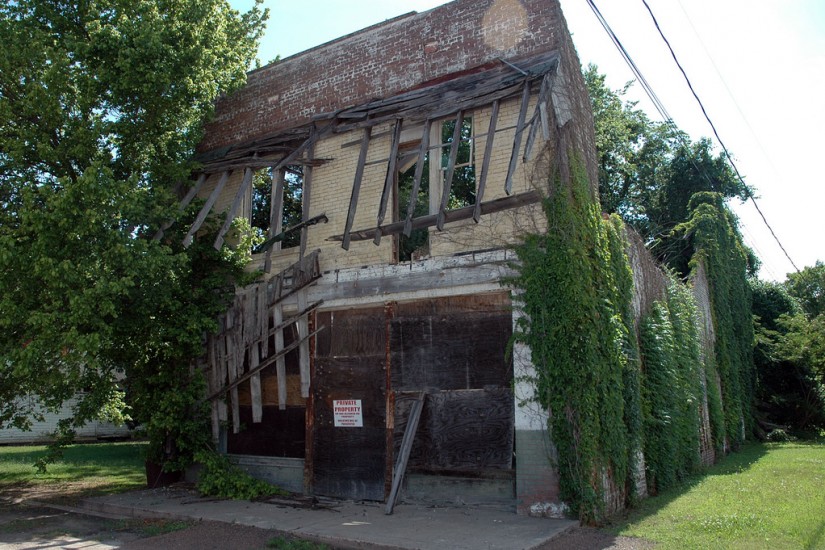 The 2007 remains of Bryant's Grocery in Money, Mississippi, the site where Emmet Till allgedly whistled at a white woman in 1955.
flickr.com/south_2007

Along the edge of Money Road, across from the railroad tracks, an old grocery store rots.

In August 1955, a 14-year-old black boy visiting from Chicago walked in to buy candy. After being accused of whistling at the white woman behind the counter, he was later kidnapped, tortured, lynched and dumped in the Tallahatchie River.

The murder of Emmett Till is remembered as one of the most hideous hate crimes of the 20th century, a brutal episode in American history that helped kindle the civil rights movement. And the place where it all began, Bryant’s Grocery & Meat Market, is still standing. Barely.

Today, the store is crumbling, roofless and covered in vines. On several occasions, preservationists, politicians and business leaders — even the State of Mississippi — have tried to save its remaining four walls. But no consensus has been reached.

Some residents in the area have looked on the store as a stain on the community that should be razed and forgotten. Others have said it should be restored as a tribute to Emmett and a reminder of the hate that took his life.

As the debate has played out over the decades, the store has continued to deteriorate and collapse, even amid frequent cultural and racial reckonings across the nation on the fate of Confederate monuments. At stake in Money and other communities across the country is the question of how Americans choose to acknowledge the country’s past.

“It’s part of this bigger story, part of a history that we can learn from,” said the Rev. Wheeler Parker, 79, a pastor in suburban Chicago and a cousin of Emmett’s who went with him to Bryant’s Grocery that day. “The store should be one of the places we share Emmett’s story.”

(The Justice Department quietly reopened the Emmett Till case last year after Carolyn Bryant Donham, the white shopkeeper, recanted parts of her story.)

In and around the Delta, the memory of Emmett’s murder lingers.

The cotton gin from which the 75-pound fan that was tethered to his neck with barbed wire was stolen is now a small museum. There are informal tours of the abandoned bridge where his body was likely tossed into the river. The barn where he was brutally beaten is unmarked, but its owner allows the occasional visitor.