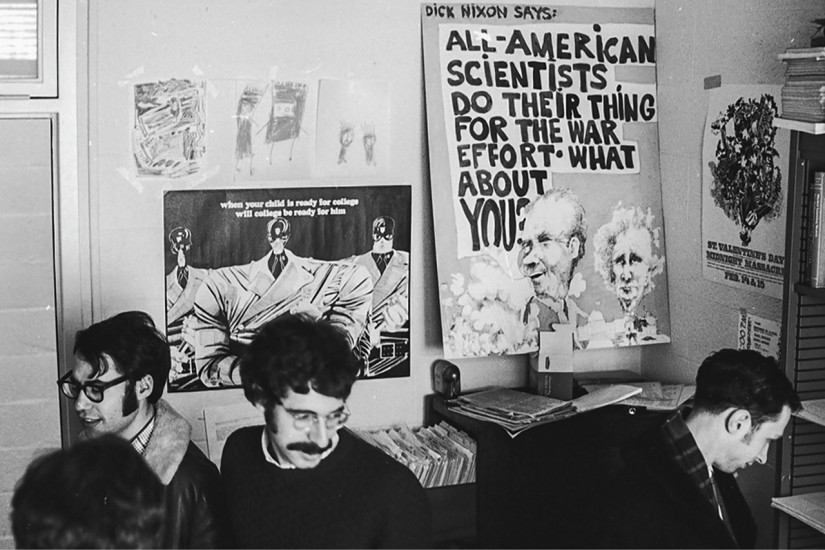 In the fall of 1968, a group of MIT students and Boston-area war resistance groups offered sanctuary to a soldier who had walked away from his post. The soldier was arrested after about a month, but the experience of sitting in solidarity sparked a desire for action among MIT's previously quiescent student body.

A new group, the Science Action Coordinating Committee (SACC), drew up a petition urging MIT students and faculty alike to abandon weapons research and instead direct their energies toward solving social problems. But when Science, The Boston Globe, and The New York Times began reporting on the students' plans for a 1-day “research strike,” faculty support waned. Mainstream faculty balked at what they deemed a counterproductive and naïve form of protest that seemed aimed as much at their employer—the university—as at the state itself. The students and faculty reached a truce through division of labor. The event we remember as “March 4” at MIT would be organized by two separate groups: the SACC, mainly composed of students, and a new organization, the Union of Concerned Scientists (UCS), consisting of faculty. The faculty group convinced the university administration to endorse a campus-wide day of reflection on science and its responsibilities to society, defanging the potential impact of a research strike. Students, meanwhile, could decide to attend the sanctioned convocation or strike on their own terms. The talks delivered at Kresge Auditorium on 3 and 4 March 1969, and reprinted in March 4, represented the most palatable form of protest MIT faculty could think of.

Barely a year after the March 4 protests, MIT announced that it would divest its interest in the Charles Stark Draper Laboratory, a flashpoint of student criticism. Because many of the faculty speakers at the convocation spoke about their desire for MIT to either divest from military research or convert military research to civilian projects, it is naturally tempting to draw a causal link between these two events. In reality, however, the administration only began to seriously consider forcing the Draper Laboratory off campus once students began attempting to storm the building later that spring.