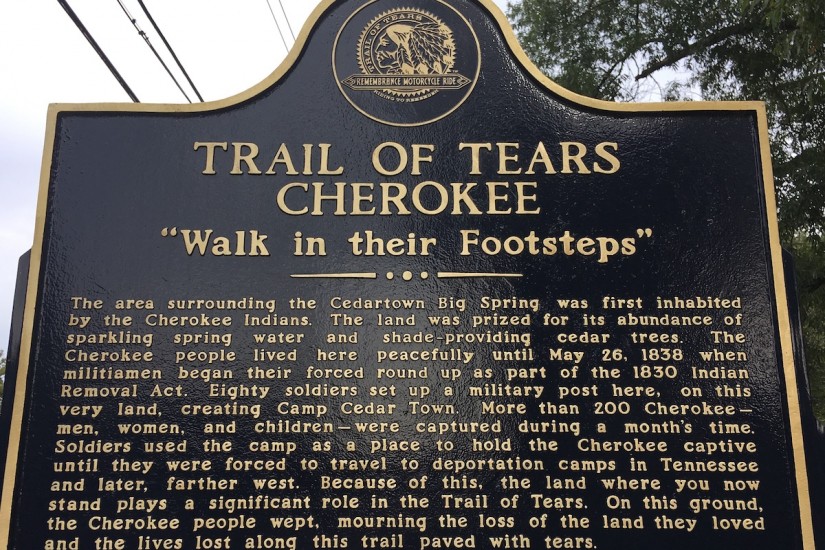 Between 1830 and 1850, about 100,000 Native Americans were forced hundreds of miles west from the eastern U.S. as part of an Indian removal policy — spearheaded by President Andrew Jackson — according to the National Park Service, which administers the Trail of Tears National Historic Trail.

The Trail of Tears was not a single event but a series of forced removals of Native Americans by the U.S. government — after the government coerced treaties or used the Army against those resisting — from the southeastern U.S. to what is now Oklahoma.

It is “one of the darkest chapters in American history,” according to the park service.

“The Trail of Tears was outright genocide,” said Jerrid Miller, archivist at the Cherokee Heritage Center.

“People sugarcoat it because they say, ‘Oh, it’s a removal.’ Well, removal is ... like the U.S. government saying, ‘Hey, there’s an emergency and this is temporary.’ Genocide is when they outright set you up for failure.”

The end of the Trail of Tears for the Cherokee Nation was 180 years ago Sunday, when — according to most sources, including the park service — the last remaining detachment arrived in what is now Oklahoma on March 24, 1839.

During an interview at the heritage center’s museum, Miller said he prefers the term commemoration.

“Anniversary is probably the worst choice of words you can use because it’s like, ‘Hey, let’s celebrate losing 25 percent of our population.’ And 25 percent — that is genocide.”

Historical sources vary, but most say between 16,000 and 20,000 Cherokees were forcibly moved between 1836 and 1838, resulting in thousands of deaths due to starvation, exposure and disease. Others died after their arrival in Indian Territory from disease or food shortages.

The estimated number of Cherokee deaths ranges from “several thousand” by the National Park Service to 4,000 by the Cherokee Nation.