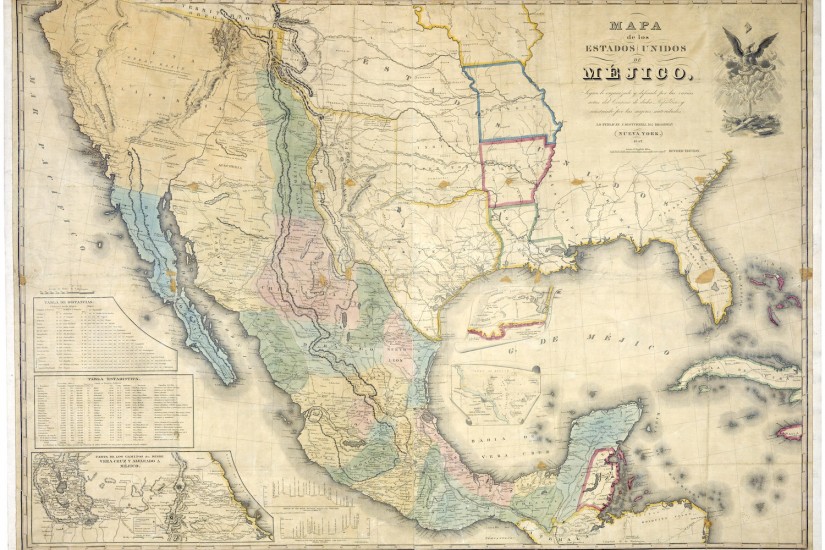 A map of Mexico before it ceded much of its northern territory to the United States (1847).
Wikimedia Commons

Mention the border with Mexico these days and dystopian images might come to mind: Agents detaining children in a holding pen, blimps hunting drones, the corpses of border crossers marking the frontier.

But even as President Trump presses ahead with his cry for a wall along the entire border — implying, yet again, that neighbors to the south threaten the richest and most powerful country on Earth — history offers other perspectives.

The photographer Tomas van Houtryve had in mind the nuanced past of what is now the American West when he set out on the border.

No, not the current one, but the long-forgotten boundary that existed before the Mexican-American War.

Mr. van Houtryve, 44, wanted to challenge what he calls the West’s “puffed-up mythology” in which Hollywood nurtured the view that the expansion of the United States spread ideas like equality, liberty and democracy in conquered lands.

“In reality, these values arrived in the West straight from Mexico City,” said Mr. van Houtryve, who was raised in California and now lives in Paris. “The main ideological import of Anglo-Americans to the West at the time was actually strident white supremacy.”

Before President James K. Polk prodded the two nations into war, Mexico was nearly twice as large and the border was some 700 miles north of where it is now. Mexico prohibited slavery; American slave owners wanted to expand the institution.

Then came the 1845 annexation of Texas, where American immigrants to what was then Mexico’s state of Coahuila y Tejas had staged their slaveholder rebellion. The Texas Revolution’s martyrs included men like the slave trader James W. Fannin.

A few years later, the United States orchestrated the war with Mexico that led to one of the most colossal land grabs in American history: territory now including Arizona, California, Colorado, Nevada, New Mexico, Utah and Wyoming.

Using a North American map from 1839 (the same year that photography is thought to have made its debut in Europe), Mr. van Houtryve traveled along Mexico’s old northern border to meet families who have lived in the region for centuries.