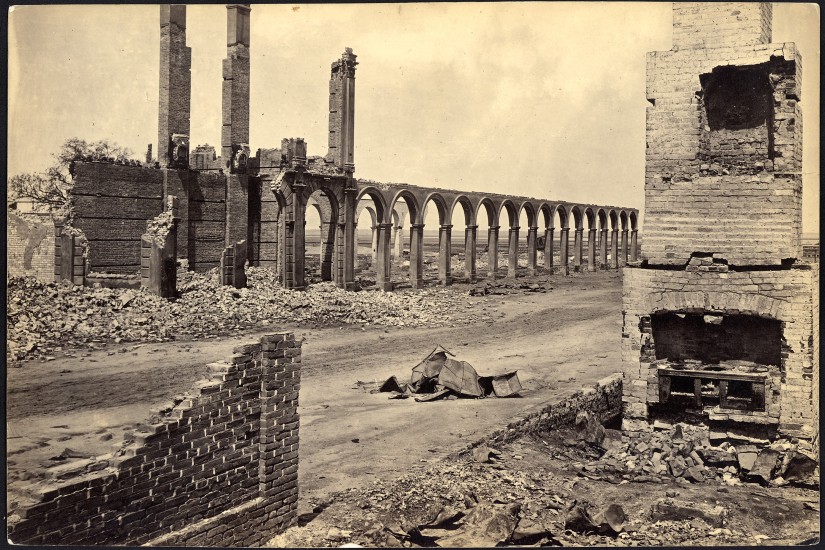 ... 1869, Memorial Day included a procession of Methodists, Baptists, Unitarians and Catholics; white Grand Army of the Republic posts in parade with a black post; and the “Mount Vernon Cornet Band (colored)” keeping step with the “Irish Nationalists with the harp and the sunburst flag of Erin.”

... 1869, Memorial Day included a procession of Methodists, Baptists, Unitarians and Catholics; white Grand Army of the Republic posts in parade with a black post; and the “Mount Vernon Cornet Band (colored)” keeping step with the “Irish Nationalists with the harp and the sunburst flag of Erin.”

But for the earliest and most remarkable Memorial Day, we must return to where the war began. By the spring of 1865, after a long siege and prolonged bombardment, the beautiful port city of Charleston, S.C., lay in ruin and occupied by Union troops. Among the first soldiers to enter and march up Meeting Street singing liberation songs was the 21st United States Colored Infantry; their commander accepted the city’s official surrender.

Whites had largely abandoned the city, but thousands of blacks, mostly former slaves, had remained, and they conducted a series of commemorations to declare their sense of the meaning of the war.

The largest of these events, forgotten until I had some extraordinary luck in an archive at Harvard, took place on May 1, 1865. During the final year of the war, the Confederates had converted the city’s Washington Race Course and Jockey Club into an outdoor prison. Union captives were kept in horrible conditions in the interior of the track; at least 257 died of disease and were hastily buried in a mass grave behind the grandstand.

After the Confederate evacuation of Charleston black workmen went to the site, reburied the Union dead properly, and built a high fence around the cemetery. They whitewashed the fence and built an archway over an entrance on which they inscribed the words, “Martyrs of the Race Course.”

The symbolic power of this Low Country planter aristocracy’s bastion was not lost on the freedpeople, who then, in cooperation with white missionaries and teachers, staged a parade of 10,000 on the track. A New York Tribune correspondent witnessed the event, describing “a procession of friends and mourners as South Carolina and the United States never saw before.”

The procession was led by 3,000 black schoolchildren carrying armloads of roses and singing the Union marching song “John Brown’s Body.” Several hundred black women followed with baskets of flowers, wreaths and crosses. Then came black men marching in cadence, followed by contingents of Union infantrymen. Within the cemetery enclosure a black children’s choir sang “We’ll Rally Around the Flag,” the “Star-Spangled Banner” and spirituals before a series of black ministers read from the Bible.

After the dedication the crowd dispersed into the infield and did what many of us do on Memorial Day: enjoyed picnics, listened to speeches and watched soldiers drill. Among the full brigade of Union infantrymen participating were the famous 54th Massachusetts and the 34th and 104th United States Colored Troops, who performed a special double-columned march around the gravesite.

The war was over, and Memorial Day had been founded by African-Americans in a ritual of remembrance and consecration. The war, they had boldly announced, had been about the triumph of their emancipation over a slaveholders’ republic. They were themselves the true patriots.

Despite the size and some newspaper coverage of the event, its memory was suppressed by white Charlestonians in favor of their own version of the day. From 1876 on, after white Democrats took back control of South Carolina politics and the Lost Cause defined public memory and race relations, the day’s racecourse origin vanished.

Indeed, 51 years later, the president of the Ladies’ Memorial Association of Charleston received an inquiry from a United Daughters of the Confederacy official in New Orleans asking if it was true that blacks had engaged in such a burial rite in 1865; the story had apparently migrated westward in ...