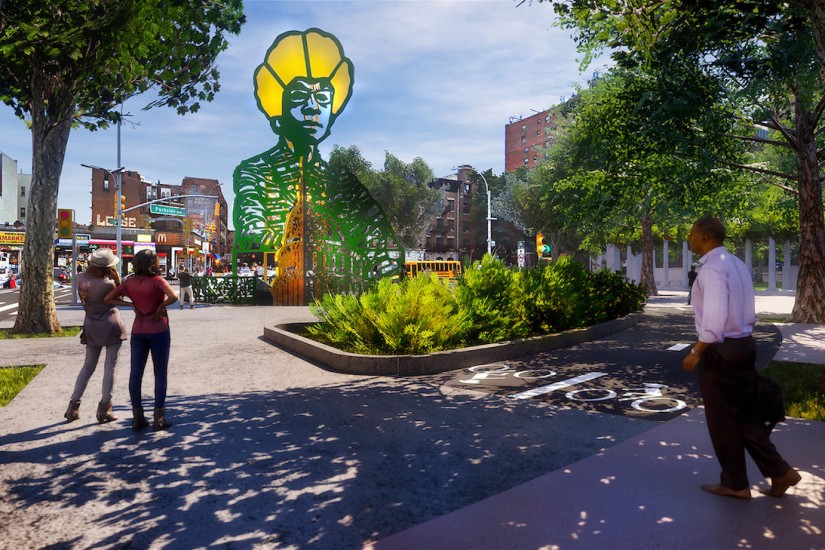 During her long political career, Shirley Chisholm became famous for firsts: In 1968, as the first black woman to serve in Congress, she represented a district that encompassed Bedford-Stuyvesant, the neighborhood where she grew up. Four years later, she ran for president, becoming the first black woman to seek that nomination from either major political party (and the first woman to pursue it among the Democrats). Ms. Chisholm retired from Congress in 1983 and died in 2005. But next year she will once again pave the way, becoming the first female historical figure to have a public monument dedicated to her in Brooklyn — a 40-foot-tall likeness in steel that will rise at the southeast corner of Prospect Park.

Its creators are the artists Amanda Williams and Olalekan Jeyifous, who won the inaugural commission for She Built NYC, an initiative introduced by first lady Chirlane McCray, Deputy Mayor Alicia Glen and the Department of Cultural Affairs last summer to correct the gender imbalance in the city’s public art and monuments, nearly all of which are devoted to men.

“Congresswoman Shirley Chisholm’s dynamic leadership and activism continues to inspire all who learn her story, and her service deserves public recognition,” Ms. McCray said in a statement. “This artwork will be bright, bold, and makes a statement — just like Chisholm herself.”

The pair’s design, called “Our Destiny, Our Democracy,” selected from five finalists, fuses the Congresswoman’s signature portrait with the silhouette of the United States Capitol and patterns of vines and leaves, a reference to the vegetation of the park. These images create a multipronged form that would rise to the height of nearby trees, over an amphitheater-style space, whose seats would be inscribed with the names of women who have followed in Ms. Chisholm’s footsteps.

“This becomes something that’s occupiable,” explained Ms. Williams, who is 44 and based in Chicago. “It allows you to be enveloped in a conversation about interacting and bringing others along. This approach to a monument is that it’s an invitation to participate.”

Kristina Newman-Scott, the president of the local arts organization BRIC and a member of the voting panel for the Chisholm competition, called it “almost like a visual hug.”

“I really feel like her arms are present, and her energy is present, and she is giving love to this community,” she continued.