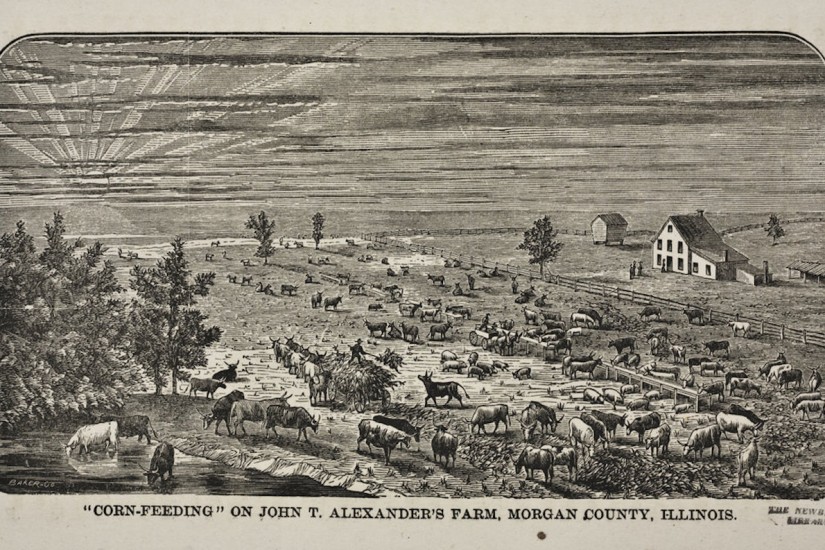 Corn-feeding cattle in central Illinois in the 1870s.
The Newberry Library
…

The dissonance between the mythical heartland and contemporary reality inspired Hoganson to embark on a historical quest to discover the truth: “What is the nation at heart, when we unbind it from myth?” she asks. Using her new home as a lens, she dug through local histories of Champaign County to probe the region’s supposedly isolationist roots. Her book begins with the first European settlers to the region, who invented the idea of “the local” to distinguish themselves from the Kickapoo people, whose nomadism they regarded as vagrancy. Pioneers frequently invoked their own property holdings to rationalize their rights to the land, positioning Native American transience as justification for dispossession: The Kickapoo could not truly lay claim to the land because they had not put down roots.

The irony, as Hoganson points out, is that the settlers themselves were equally mobile: They spent years on the road as soldiers, salesmen and missionaries. They traveled the country with exotic menageries and explored the circumference of Lake Superior on snowshoes. As the region developed, foreign relations were inscribed onto the habits of daily life. Far from an “insulated core,” the Midwest — particularly during the period between the Civil War and World War I — was a place where borderlands converged, a region dependent upon the flow of cattle across the borders of Canada and Mexico and imported British hogs that had been crossbred with Chinese stock.

From the beginning, these global relationships were not equitable. Midwestern farmers regarded Europeans and Canadians as worthy trade allies, but feared Mexicans and Native Americans as threats. They insisted on borders to protect themselves from outsiders but violated these demarcations when it served their interests. In several memorable passages, Hoganson uncovers dog-whistle racial politics in the pages of agricultural gazettes. Descriptions of the Berkshire pig, for example, known as the “black breed,” drew heavily on phrenology textbooks.

One of Hoganson’s central points — an original contribution to the history of the region — is that Midwestern farmers were deeply entangled with British imperialism. Throughout the 19th century, Illinois farmers “piggybacked” on existing imperial infrastructure to boost their profits. They relied on railroads that were built with British capital and supplied provisions for British soldiers, capitalizing on imperial conflicts like the Boer War and the Boxer Rebellion.