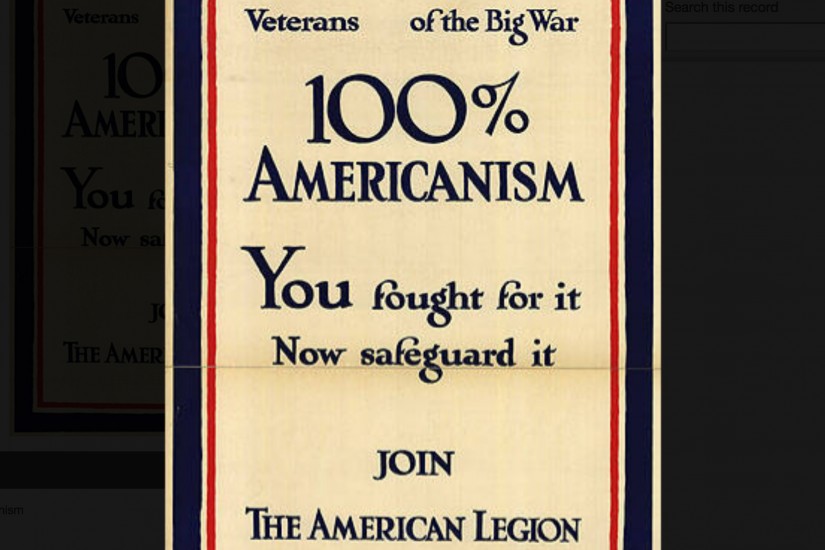 One hundred years ago this week, World War I veterans gathered in St. Louis to promote “100 percent Americanism.” This was the first domestic gathering of the American Legion, which quickly grew into the largest and most influential veterans’ organization in the country. The St. Louis Caucus, as it is known in Legion lore, took place May 8-10, 1919, in downtown, mostly at the Shubert Theatre, located at 12th and Locust.

This was where the American Legion officially adopted its name. The group’s call for “100 percent Americanism” helped launch a period of intense xenophobia and anti-immigrant policies in interwar America. It is a legacy that continues to affect our political landscape today.

While the early American Legion billed itself as non-political and non-partisan, it regularly staked out pointed positions on the issues of the day. Support for the suddenly swelled number of veterans was a high priority, of course. (Later, the American Legion would play a prominent role in promoting the landmark 1944 G.I. Bill.) But so was denouncing perceived enemies on the home front, namely labor union radicals, such as the Industrial Workers of the World, Communists — the Bolshevik Revolution was not yet two years old — and conscientious objectors to the recent war, which we now call World War I.

The Legion blamed immigrants for undermining American democracy and contributing to social upheaval. At the Caucus in St. Louis, they urged Congress to pass a law to deport “alien slackers” who were unequipped for assimilation. “There is no place in America for such a creature,” the Legion wrote in its newsletter. “He is worse than a parasite; he is a menace.”
Never mind that tens of thousands of immigrants volunteered for the armed forces in World War I or served their adopted country in myriad other ways. In pronouncing this version of Americanism, the Legion drew upon the worst of the nation’s wartime tendencies: rising xenophobia.

President Woodrow Wilson had initially invoked the idea of Americanism before his re-election victory in 1916, five months before the U.S. entered the war. It was an assertion of patriotism in a nation on the cusp of world power status. Yet it was also defensive, suggesting that not every member of society could participate equally in this national project.

German-Americans were obvious targets during the conflict. After the armistice, attention turned to immigrants from southern and eastern Europe, who were accused of importing radical ideologies and promoting worker militancy.