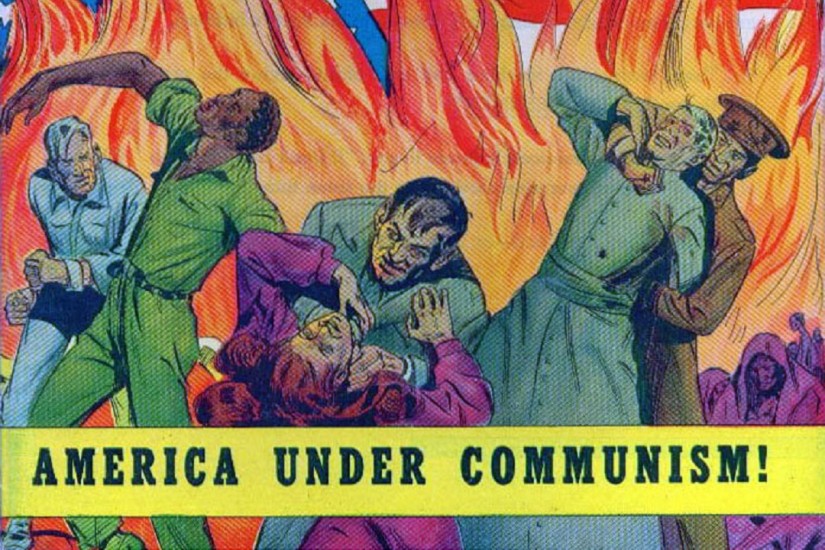 Cover to the propaganda comic book "Is This Tomorrow",' 1947.
Wikimedia Commons

The Communist, in the American imagination, has always been the ultimate outside agitator.

No matter how homegrown a resistance movement was, or how local the organizers were, the first response from those facing protest has always been to blame an outsider. This was as true for town hall protests during the February 2017 congressional recess as it was for anti-lynching struggles more than 80 years ago during the Great Depression.

For much of the past century in this country, this undesirable alien — seen as being from someplace foreign and in need of deportation back there — stood accused of invading to stir up trouble where there was none, where previously the locals had been docile and willing to accept whatever everyday inequality was their lot. Though many Communists were indeed immigrants, who would be targeted for harassment and deportation for as long as the party existed, many, too, were homegrown, born and raised in the same cities and towns as their persecutors.

The Communist Party U.S.A., founded in 1919, was closely tied to what emerged as the Soviet Union after the 1917 October Revolution, but the American party also drew on decades of local radical organizing. Many of its members came out of the Socialist Party, the labor movement and even anarchist activism, but the party also found a base among African-Americans when Communists proved willing to take on their struggles for self-determination.

In short, American Communism was a movement that grew out of what the historian Robin D. G. Kelley, the author of “Hammer and Hoe: Alabama Communists During the Great Depression,” calls “the most despised and dispossessed elements of American society.” It was the black workers drawn to the party, Professor Kelley argues, who shaped its political choices as much as the varying dictates that came from the Communist International, Moscow’s directorate for foreign parties.