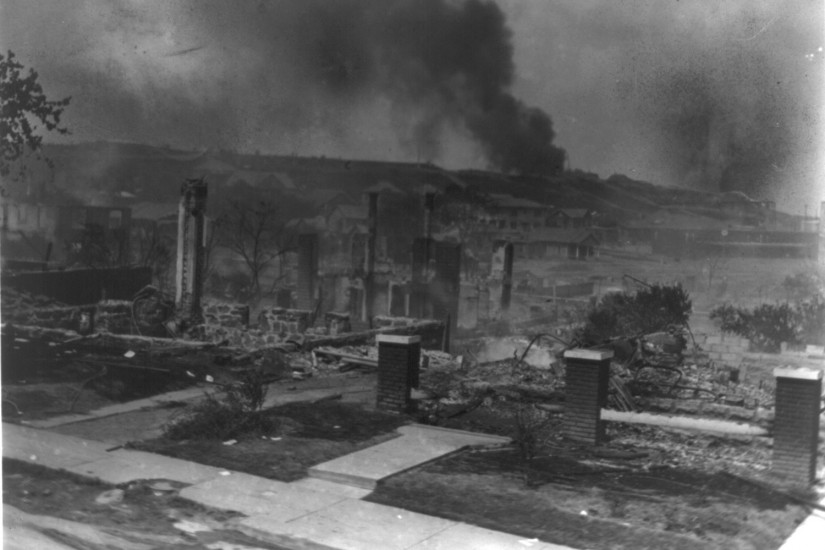 Smoldering ruins of African American's homes following the race riots in Tulsa, Oklahoma, in which whites burned down "Black Wall Street" (1921).
Wikimedia Commons
…
In the decades after the end of Reconstruction, as the nation abandoned its black citizens and the South descended into the age of Jim Crow, African-Americans succeeded, against all odds, in acquiring a remarkable amount of land. By 1910, black people claimed ownership of nearly 16 million acres in America. They did so in spite of the constant threat of forced dispossession at the hands of white mobs and officials. Sometimes, black property owners faced sudden and violent attacks, such as the racial cleansing of Forsyth County, Ga., in 1912 and the destruction of “Black Wall Street” in Tulsa, Okla., in 1921.

As often, though, whites undermined black property ownership by more subtle means. White tax assessors routinely overvalued black-owned land, forcing black property owners to bear a heavier tax burden than whites (to pay for services they didn’t receive) and slowly draining families of earnings. If black-owned property became valuable or a black property owner challenged white supremacy, local officials could simply declare the property tax-delinquent and sell it at a tax sale. Writing in 1940, the N.A.A.C.P. special counsel Thurgood Marshall described the manipulation of tax-delinquency laws by white officials in the South as a practice and custom of “depriving Negroes of their property through subterfuge.”

Despite this, at the dawn of the civil rights era, African-Americans still held substantial amounts of land, mostly in the South, a major portion of which was in some of the region’s fastest-growing areas and hottest real estate markets. Thanks to huge federal investments during the New Deal, the South in the mid-20th century went from being what President Franklin Roosevelt described as the “nation’s No. 1 economic problem” in the 1930s to the booming Sun Belt by the 1960s. The region’s rapid growth, along with the emergence of new industries like vacationing and tourism in rural and coastal areas, created an insatiable demand for land and made black property owners targets for removal by white officials and plunder by profit-seeking speculators. Both exploited the byproducts of blacks’ history of oppression to achieve their objectives.
…
View on New York Times
View Connections