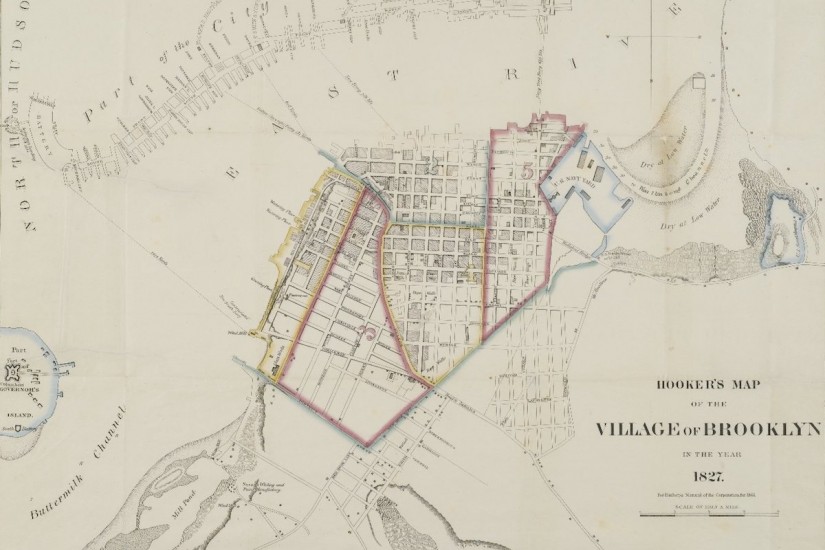 Hooker's Map of the Village of Brooklyn, 1827.
Brooklyn Museum
…

Whitman’s tenure at the Eagle coincided with the height of the roaring 1840s—an explosion of economic growth, political expansionism, and cultural achievement in the United States. The era between 1825 and the Civil War was sometimes called “the age of go-ahead,” suggesting a time of uninhibited ambition when anything seemed possible—especially in New York City, which at this time was coterminous with the island of Manhattan. This boom mentality led to significant population growth and economic investment across the river in Brooklyn, contributing to its incorporation as a city in 1834. When Whitman’s family arrived in Brooklyn in 1822, it was an independent village of seven thousand. By 1855 it was the fourth largest city in the United States. In Whitman’s editorials and elsewhere, the Eagle frequently remarked on the city’s changing landscape.

In nearly all his reporting and editorials Whitman seems more interested in the people he observed than in any events taking place. He delights in crowds, human enjoyment, and lived experience. As a journalist, he was as likely to describe the imagined feelings of a crime victim as the minutes of a council meeting, and his descriptions of green spaces, gathered people, and urban life are heartfelt and often touching.

Whitman believed that art could be a force for good—that art, theater, and literature could impart moral values to its audience. He saw the same potential in newspapers: they could shape people’s ideas and educate them about the world. On June 1, 1846, the newspaper rebranded as the Brooklyn Daily Eagle and Kings County Democrat. On the occasion of this rechristening, Whitman addressed his readers:


There is a curious kind of sympathy (haven’t you ever thought of it before?) that arises in the mind of a newspaper conductor with the public he serves. He gets to love them. Daily communion creates a sort of brotherhood and sisterhood between the two parties…Much good can always be done, with such potent influence as a well-circulated newspaper. To wield that influence is a great responsibility. There are numerous noble reforms that have yet to be pressed upon the world. People are to be schooled, in opposition perhaps to their long-established ways of thought.—In politics, too, the field of improvement is wide enough yet; the harvest is large, and waiting to be reaped—and each paper, however humble, may do good in the ranks.
…
View on Lapham’s Quarterly
View Connections