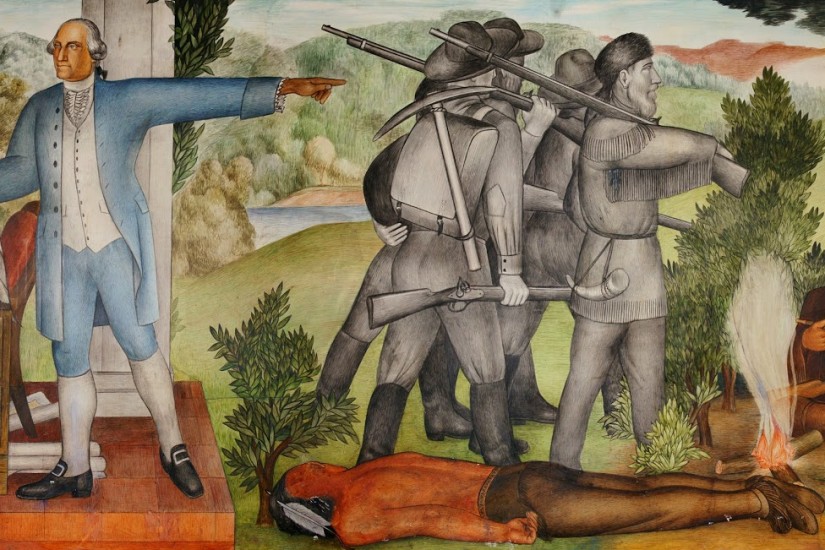 Section of “Life of Washington” by Victor Arnautoff.
Richard Evans/Living New Deal
…
By now stories of progressive Puritanism (or perhaps the better word is Philistinism) are so commonplace — snowflakes seek safe space! — that it can feel tedious to track the details of the latest outrage. But this case is so absurd that it’s worth reviewing the specifics.

Victor Arnautoff, the Russian immigrant who made the paintings in question, was perhaps the most important muralist in the Bay Area during the Depression. Thanks to President Franklin Roosevelt’s Works Progress Administration, he had the opportunity to make some enduring public artworks. Among them is “City Life” in Coit Tower, in which the artist painted himself standing in front of a newspaper rack conspicuously missing the mainstream San Francisco Chronicle and packed with publications like The Daily Worker.

Arnautoff, who had assisted Diego Rivera in Mexico, was a committed Communist. “‘Art for art’s sake’ or art as perfume have never appealed to me,” he said in 1935. “The artist is a critic of society.”

This is why his freshly banned work, “Life of Washington,” does not show the clichéd image of our first president kneeling in prayer at Valley Forge. Instead, the 13-panel, 1,600-square-foot mural, which was painted in 1936 in the just-built George Washington High School, depicts his slaves picking cotton in the fields of Mount Vernon and a group of colonizers walking past the corpse of a Native American.

“At the time, high school history classes typically ignored the incongruity that Washington and others among the nation’s founders subscribed to the declaration that ‘all men are created equal’ and yet owned other human beings as chattel,” Robert W. Cherny writes in “Victor Arnautoff and the Politics of Art.”

In other words, Arnautoff’s purpose was to unsettle the viewer, to provoke young people into looking at American history from a different, darker perspective. Over the past months, art historians, New Deal scholars and even a group called the Congress of Russian Americans have tried to make exactly that point.