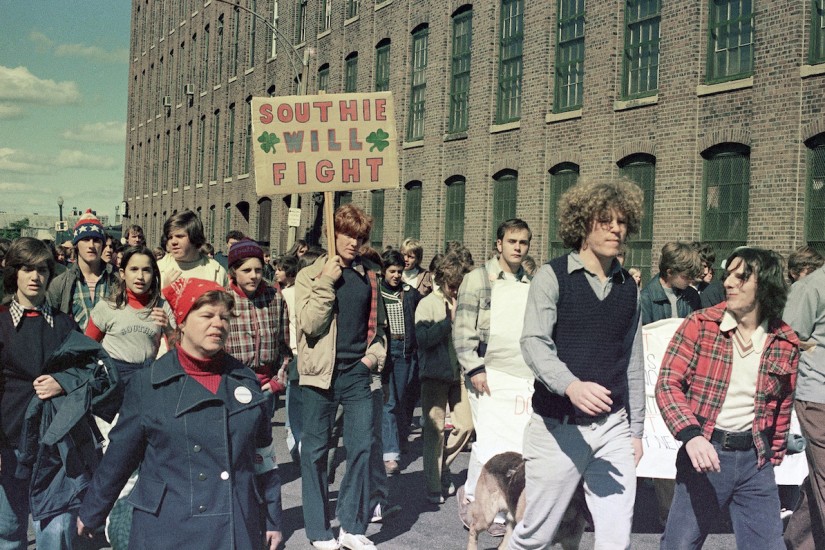 Anti-busing parents march in South Boston on Oct. 4, 1974, along with students in protest of African American students being bused into the South Boston school district.
AP Photo/J. Walter Green
…

Historically in this country, the removal of racist legal barriers has often come without any real effort to cure the inequality the now unconstitutional laws and policies had created. This was different. Led by Chief Justice Earl Warren’s Supreme Court, federal judges were mandating desegregation plans that did more than simply strike down segregation on paper the way past courts had. A series of rulings called for a fundamental destruction of caste schools in this country. Segregation had been forced, so integration would have to be forced as well.

Busing became the literal vehicle of integration because in most places black and white people did not live in the same neighborhoods. This was not incidental. The courts understood that in both the North and the South, a dragnet of federal, state, local and private policies and actions had protected white neighborhoods and penned black people into all-black areas, and that this made it impossible in most areas to create integrated schools by simply zoning nearby black and white children to the same buildings. To get integrated schools, courts had to overcome entrenched government-sanctioned residential segregation.

In 1971, in a case involving one of the largest school districts in North Carolina, the Supreme Court laid out the necessity of busing with striking clarity:


Absent a constitutional violation, there would be no basis for judicially ordering assignment of students on a racial basis. All things being equal, with no history of discrimination, it might well be desirable to assign pupils to schools nearest their homes. But all things are not equal in a system that has been deliberately constructed and maintained to enforce racial segregation. The remedy for such segregation may be administratively awkward, inconvenient, and even bizarre in some situations, and may impose burdens on some; but all awkwardness and inconvenience cannot be avoided.

And despite the constant assertion that “busing” failed, busing as a tool of desegregation, and court-ordered desegregation in general, was extraordinarily successful in the South.

In 1964, 10 years after the Brown decision, just 2 percent of black children in the South attended schools with white children. By 1972, nearly half were attending predominantly white schools. After a very short period of serious court intervention and federal enforcement, the South had gone from the most segregated region of the country for black children to the most integrated, which it remains 40-some years later. For the first time in the history of American public education, significant numbers of white children were being ordered to attend the schools that had been deemed good enough only for black children, and black children got access to the superior schools this country had always reserved for white children.