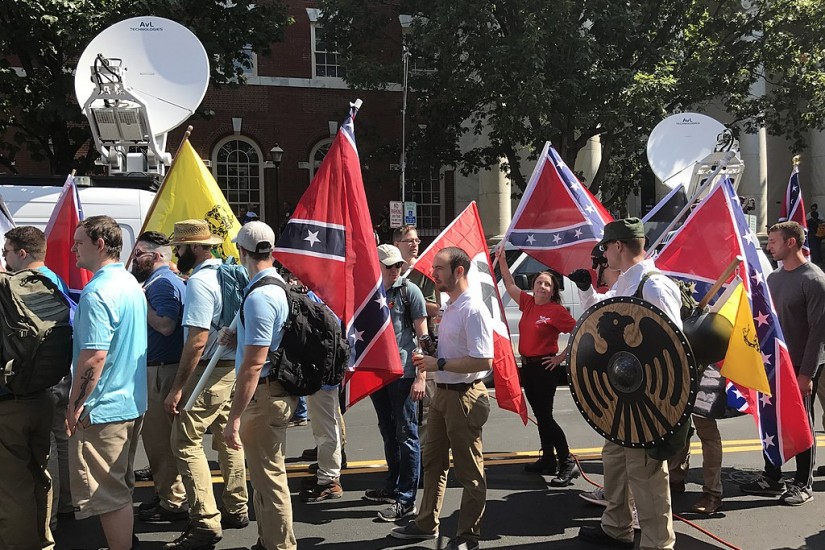 ... They were joined by old-guard white supremacists like David Duke, and before they were through, a young man, inspired by this gathering and the white supremacist ideology, drove his car into a crowd of peaceful counterdemonstrators, injuring several dozen and killing a young woman, Heather Heyer.

... They were joined by old-guard white supremacists like David Duke, and before they were through, a young man, inspired by this gathering and the white supremacist ideology, drove his car into a crowd of peaceful counterdemonstrators, injuring several dozen and killing a young woman, Heather Heyer.

Until Charlottesville, the debate over Confederate monuments was mostly about history, pitting claims about the preservation of Southern heritage against the monuments’ historical ties to slavery and Jim Crow. What has become crystal clear in the last two years is that these monuments are no longer relics of a horrendous past — they have been resurrected as symbols of white nationalism.

The people who showed up in Charlottesville were not there because of their nostalgia for the Confederacy. Many had no Confederate ancestry, nor were they Southern. They arrived angry about being displaced, or perhaps replaced, by immigrants; by women; by African-Americans; by anyone who, in effect, challenged white male patriarchy. They saw the potential removal of the Lee monument, a statue with historical links to white supremacy, as a siren call for their movement.

The United Daughters of the Confederacy, the organization that sponsored the construction of most of the country’s Confederate monuments, has tried to distance itself from the white nationalists’ embrace of the women’s work in the first half of the 20th century. In December 2018, the organization’s president general, Nelma Crutchers, denounced “any individual or group that promotes racial divisiveness or white supremacy” and called “on these people to cease using Confederate symbols for their abhorrent and reprehensible purposes.”

Of course, the fact that white supremacists have so easily attached themselves to the monument debate gives the lie to the assertion that it was ever simply about “Southern heritage.” In truth, as the monuments’ opponents have always claimed, honoring Lee or any other Confederate figure is to honor the brutal system of slavery they sought to defend, and the white supremacist ideology of the Jim Crow era during which the monuments were erected.

Ms. Crutchers, like other modern defenders of the Confederate past, suggests that such assertions are just a matter of interpretation and historical relativism, and that we should not “impose the standards of the 21st century on these Americans of the 19th century.”

Her predecessors had fewer qualms about embracing white supremacy. Mildred Rutherford, who served as the organization’s historian in the early part of the 20th century, made it her personal crusade to see to it that future generations of white children were not “misinformed” about Southern slavery. She spoke of how former slaves were “savage to the last degree” and claimed that “slavery was no disgrace to the owner or the owned.”

Lizzie George Henderson, an early president general of the organization, praised her father, Senator James Z. George, for writing the Mississippi Plan of 1890, which systematically excluded black men from politics. According to Henderson, the plan, adopted by other states of the former Confederacy, placed “white supremacy on an enduring and constitutional basis.”

The women who raised the money to build the monuments understood the connections between these symbols and white supremacy. African-Americans and their ancestors who were persecuted under the system of Jim Crow have made the connection, as have many white Southerners. And the men who organized and participated in the Charlottesville uprising made that connection.

But there is a large group of white Americans who are hesitant to acknowledge the link between white supremacist ideology and Confederate monuments. They are the same Americans who hesitate to criticize an inhumane immigration policy, and the hateful rhetoric President Trump has directed at members ...