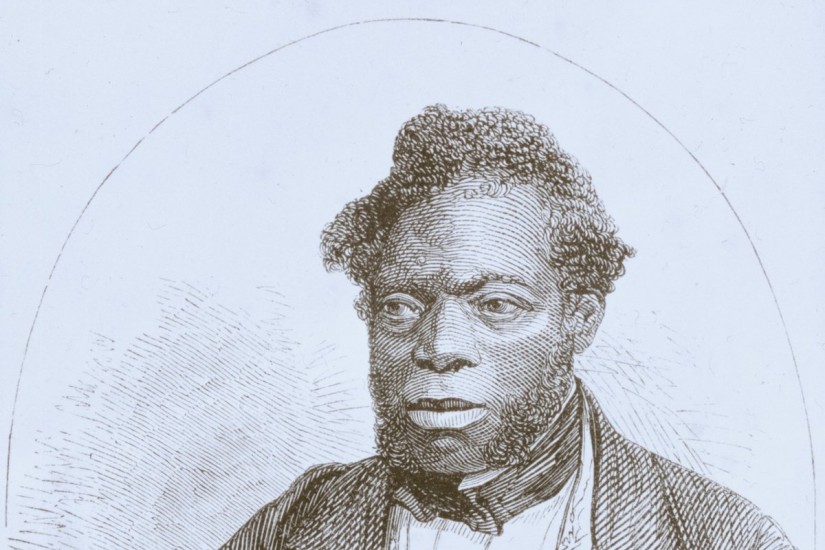 John Brown, an enslaved man who endured a series of painful experiments by a Georgia doctor determined to prove that black skin was thicker than white skin.
Schomburg Center for Research in Black Culture/New York Times
…

The excruciatingly painful medical experiments went on until his body was disfigured by a network of scars. John Brown, an enslaved man on a Baldwin County, Ga., plantation in the 1820s and ’30s, was lent to a physician, Dr. Thomas Hamilton, who was obsessed with proving that physiological differences between black and white people existed. Hamilton used Brown to try to determine how deep black skin went, believing it was thicker than white skin. Brown, who eventually escaped to England, recorded his experiences in an autobiography, published in 1855 as “Slave Life in Georgia: A Narrative of the Life, Sufferings, and Escape of John Brown, a Fugitive Slave, Now in England.” In Brown’s words, Hamilton applied “blisters to my hands, legs and feet, which bear the scars to this day. He continued until he drew up the dark skin from between the upper and the under one. He used to blister me at intervals of about two weeks.” This went on for nine months, Brown wrote, until “the Doctor’s experiments had so reduced me that I was useless in the field.”

Hamilton was a courtly Southern gentleman, a respected physician and a trustee of the Medical Academy of Georgia. And like many other doctors of the era in the South, he was also a wealthy plantation owner who tried to use science to prove that differences between black people and white people went beyond culture and were more than skin deep, insisting that black bodies were composed and functioned differently than white bodies. They believed that black people had large sex organs and small skulls — which translated to promiscuity and a lack of intelligence — and higher tolerance for heat, as well as immunity to some illnesses and susceptibility to others. These fallacies, presented as fact and legitimized in medical journals, bolstered society’s view that enslaved people were fit for little outside forced labor and provided support for racist ideology and discriminatory public policies.

Over the centuries, the two most persistent physiological myths — that black people were impervious to pain and had weak lungs that could be strengthened through hard work — wormed their way into scientific consensus, and they remain rooted in modern-day medical education and practice.