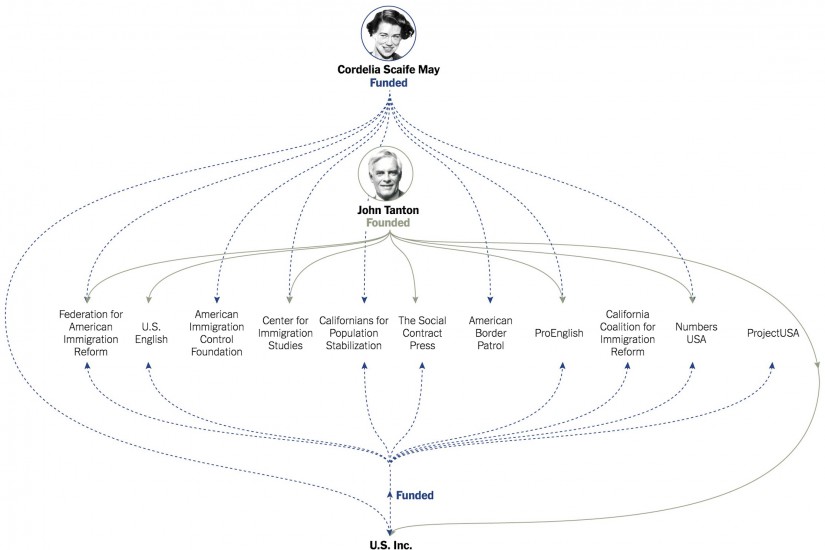 A graphic depicting anti-immigration organizations funded by Cordelia May's money.
Weiyi Cai/New York Times
…
She was an heiress without a cause — an indifferent student, an unhappy young bride, a miscast socialite. Her most enduring passion was for birds.

But Cordelia Scaife May eventually found her life’s purpose: curbing what she perceived as the lethal threat of overpopulation by trying to shut America’s doors to immigrants.

She believed that the United States was “being invaded on all fronts” by foreigners, who “breed like hamsters” and exhaust natural resources. She thought that the border with Mexico should be sealed and that abortions on demand would contain the swelling masses in developing countries.

An heiress to the Mellon banking and industrial fortune with a half-billion dollars at her disposal, Mrs. May helped create what would become the modern anti-immigration movement. She bankrolled the founding and operation of the nation’s three largest restrictionist groups — the Federation for American Immigration Reform, NumbersUSA and the Center for Immigration Studies — as well as dozens of smaller ones, including some that have promulgated white nationalist views.

Today, 14 years after Mrs. May’s death, her money remains the lifeblood of the movement, through her Colcom Foundation. It has poured $180 million into a network of groups that spent decades agitating for policies now pursued by President Trump: militarizing the border, capping legal immigration, prioritizing skills over family ties for entry and reducing access to public benefits for migrants, as in the new rule issued just this week by the administration.

Mrs. May’s story helps explain the ascendance of once-fringe views in the debate over immigration in America, including exaggerated claims of criminality, disease or dependency on public benefits among migrants. Though their methods radically diverged, Mrs. May and the killer in the recent mass shooting in El Paso applied the same language, both warning of an immigrant “invasion,” an idea also promoted by Mr. Trump.

In many ways, the Trump presidency is the culmination of Mrs. May’s vision for strictly limiting immigration. Groups that she funded shared policy proposals with Mr. Trump’s campaign, sent key staff members to join his administration and have close ties to Stephen Miller, the architect of his immigration agenda to upend practices adopted by his Democratic and Republican predecessors.

“She would have fit in very fine in the current White House,” said George Zeidenstein, whose mainstream population-control group Mrs. May supported before she shifted to anti-immigration advocacy. “She would have found a sympathetic ear with the present occupant.”